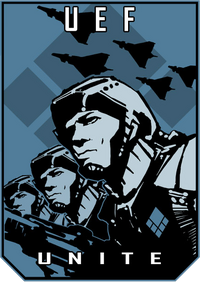 The United Earth Federation is the "core human" faction, representing the natural technological evolution of modern human technology. The UEF seeks to unify the once great Empire that is now splintered. They are in combat with the Cybran Nation and the Aeon Illuminate. UEF military is more conventional-styled than the others, relying on "classic" weaponry like battle tanks and projectile weapons such as bullets and explosives.

Its weapon choice usually makes UEF units to be of limited efficiency against moving targets, as projectiles aren't too good at tracking targets, but their sheer power can do serious damage to structures and slow-moving units. Also, UEF units tend to be more heavily armored.

In the 33rd Century, the old Earth Empire finally collapsed. As chaos engulfed the interstellar empire, the military, under the aegis of the Earth Command, stepped forward to restore order.

Acting in a severe and often draconian manner, EarthCom made the difficult decisions that politicians, mired in corruption and their own self-interest, could not. Entire worlds were abandoned and much of the Quantum Gate Network was intentionally destroyed in an effort to isolate the retreating Prime Worlds from the rest of the galaxy.

Despite the best efforts of the military, civil war erupted. After a hundred years, EarthCom was finally able to restore order and establish a new government, which was christened the United Earth Federation.

Risen, phoenix-like from the ashes of the old Earth Empire, the United Earth Federation vowed to purge itself of bureaucratic corruption and remain pure to a single task: the rescue of mankind's war-torn worlds and an end to the Infinite War. By any and all means necessary.

It has worked toward that goal by maintaining an iron grip on the new empire, creating a seemingly democratic but practically totalitarian government out of what might be considered the most successful military coup in human history.

The average UEF citizen is not too different from a 20th-21st century Earth citizen. They are artisans, athletes, craftsmen, warriors and philosophers. They desire stability and order, but their ideas on how this should be achieved vary widely. Each has their own opinion on how the government should achieve its goals and whether or not the UEF even has the right to try and restore something that failed so long ago. Ancient religions are as varied and diverse as they were in pre-war days and continue to be a motivating factor for many.

Even if individuals differ in their political or social perspectives, the single most common trait shared by every UEF citizen is their sense of brotherhood and community. UEF colonists really band together when times are tough. Positively contributing to society and personal improvement is a way of life for UEF citizens. For this reason, UEF communities very rarely contain vagabonds and homeless individuals.

The UEF rulers are expansive, aggressive and authoritarian. They believe that this is necessary to ensure galactic order and the common good. They are attempting to rebuild the Empire that fell at the onset of the Infinite War and with memories of such dark times still present all around them, UEF leaders can be driven to justify extreme measures.

Their main focus is their military might and their prime virtue is order. They see nothing wrong with utilizing technology, including genetic engineering, to help achieve that lauded goal. In fact, the vast majority of the UEF's citizenry are directly descended from cloned or genetically enhanced colonists, as are the Aeon and Cybran populations. Unlike the other two factions however, the UEF employs wide-scale genetic modification programs among their own populace designed to help 'facilitate' order and control, a holdover from the old Earth Empire's policy. Their ACU pilots are also heavily genetically engineered, with complex skills embedded in their genes from birth and a strong focus on unthinking loyalty. But the most visible sign of the UEF's tampering with nature can be seen with the use of Symbionts, humans with cybernetic implants and twined with a sophisticated symbiotic AI. These Symbionts are integral to a colony's survival and perform a variety of roles.

The Symbiont program operates on a volunteer-only basis, with all UEF citizenry eligible for the process. Thousands of applicants apply each year, eager to do their part to help the UEF and their local community. What they are not told however is that all Symbionts are subject to a hidden loyalty program, designed to still free will and ensure perfect loyalty to the UEF. This is the primary reason for the continued conflict between the Cybran Nation and the UEF. To Cybrans, the use of the loyalty programming to force these symbionts to perform mental tasks for the UEF is tantamount to slavery, and this fuels the animosity between the two sides.

Great care has been taken by UEF propagandists to hide the existence of the loyalty program from the public and discredit Cybran claims to the contrary. Dr. Gustav Brackman|Brackman]] is painted as a power-mad dictator, using viruses to corrupt and control normal Symbionts, claiming that he is the one to use a loyalty program, not them, and that the UEF war effort against the Cybrans is an attempt to rescue friends and family members from his clutches, as well as liberate the countless generations of brainwashed symbionts born and raised in the Cybran Nation.

The Birth of the Cybrans[]

The UEF units are designed to be reminiscent of older tanks and aircraft from the twentieth and twenty-first centuries. They favor heavy armor over movement speed and weaponry power. Also, sometimes tacked-on, but effective abilities are observed, such as Radar jamming on the Thunderhead or personal shielding on the Titan. As a result of the better armor, UEF units often last longer in combat but are not as capable of dealing damage as effectively as Aeon units. Also, most turreted weapons turn more slowly than other races weapons, thus making UEF units slower to respond to assaults against their units. The UEF forces are generally more functional than aesthetic, making them the near polar opposite of the Aeon. They also have some of the biggest trade-offs for certain abilities that are included in their experimentals.

"Fatboy" Mobile Factory: A tracked mobile base that can crawl across land and the ocean floor. It has a variety of weapons, including 4 battleship turrets, as seen on the Summit, multiple torpedo tubes and anti-aircraft capability. These are joined by a strong shield generator that can protect other units in its range. The Fatboy can construct Tech almost all (except SACU) land units at high speed and can repair and re-arm aircraft, but can only do any of this when on land, where underwater the only three abilities it retains is shielding, torpedoes, and storage of aircraft. However it's not intended for a direct assault as it is more of a mobile siege base, although it seems to look like a Pillar tank up-sized to an experimental and modified greatly. To advance on open ground, secure it with its factory parts and advance. Commanders recommend using it similarly like most artillery pieces: behind the front line of troops and let it bombard the enemy into submission, and at the same time producing reinforcements. Commanders understanding how to use this siege weapon will effectively kill untold amounts of its counterpart land units. Spiderbots and the Galactic Colossus lose out to its huge range, but is vulnerable to faster, lighter units, such as air units. The Fatboy does have two side-armed riot guns as defense against any land unit that gets in its shield, but these riot guns are not very effective at all, if only for the fact that they only can swivel slightly if they must cope with moving targets. The Fatboy dishes out huge firepower at a very good range with a fairly good ROF, which is similar to the Triad UEF T2 defense turret but much more powerful damage-wise. Some commanders see the Fatboy as the best experimental unit in the game. Note that the Fatboy can protect a limited amount of air units underwater by loading them on the air staging platform and driving underwater. With the advent of Forged Alliance, the Fatboy's capabilities have been reduced by the large increase in firing randomness in its main guns, as well as its increase in cost.

"Atlantis" Submersible Aircraft Carrier: Can hold, refuel, and repair up to 150 aircraft, depending on size (except transports). It has several anti-aircraft surface-to-air missile launchers, but primarily relies on powerful torpedoes (from four torpedo tubes) to inflict damage. This is considered to be the best naval unit in the game, due to the fact it has extreme power as an anti-air or anti-submersible unit. The Atlantis is also capable of constructing any UEF aircraft with the exception of transports, generally faster than a Tech 3 Air Factory. It derives its name as the "King of the Sea" due to its heavy armor. While the latest patches have made it slightly less godlike, it is still worth the investment as it is a rather cheap experimental that excels at its task.

"Mavor" Strategic Artillery: An extremely expensive artillery structure, the Mavor can fire extraordinarily accurate artillery shells across the largest of scenarios (the accuracy has been reduced with recent patches, more specifically the 3251 patch), thanks to it being stationary. Requires a very long time to build, and has very high energy costs. The shells are of the same basic design as the UEF's nuclear weapons, and they arm in mid-air to prevent accidental detonation. Simply building this will usually give a commander victory. However since the latest patch it has become much cheaper but at the cost of losing its perfect accuracy, although it will still hit within its blast radius of the target. While still extremely accurate and still the biggest gun in the game it may take a while longer to end the game with it than before. The Mavor does not possess as much HP as the other experimentals, so it is important to protect during and after construction, preferably with multiple Heavy Shield Generators and T3 SAM Turrets as Strategic Bombers are usually considered the biggest threat. There is also a known issue with the Mavor in which the Mavor will just extend the barrel and not move the turret unless a point on the ground is targeted.

"Novax Center" Satellite system: A building that launches a satellite that is effectively invulnerable, and fairly effective at taking out any unshielded unit. However, the weapon fired by the satellite is not very effective at attacking shields (except in numbers), so use accordingly.