The UEF T3 Mobile Missile Platform, nicknamed the Spearhead, is a UEF indirect fire unit. It is a mobile missile platform that fires 3 tactical missiles simultaneously. It is designed to overwhelm shield generators and tactical missile defenses. It has a very long reload time of almost 13 seconds, making it ill-suited for destroying mobile units.

Remember that the Spearhead fires tactical missiles, which can be shot down by TMDs. Using them against Loyalists is inadvisable, as the T3 Siege Bot will deflect the missiles back toward the Spearhead, severely damaging or destroying it. The reload time on the unit seems excessive, but doesn't feel that long in combat. A group of five of these with scout support can serve as a good assault force. If you include a T2 engineer in the formation, it can build a T2 radar to find targets for your Spearheads.

Also in 3603 it has its damage doubled so there is no excuse in not having it in your army. This unit can snipe high value targets, e.g. AA, power generators, PD, artillery. They are very cheap as well, compared to artillery and their T2 counterparts. They have longer range (80 vs 60), do 1.5 times the dps and cost exactly 2 times more than their T2 counterparts. They have more hp than 2 T2 launchers. They even take 6 kills to gain a veteran rank and the t2 ones take 3. They also travel the same speed and fire salvos, rather than one missile at at a time, so are better at overwhelming TMD. So as you can see they are superior in EVERY way to the T2 launchers. In 3603 all MMls get a damage boost. This one gets an extra 100% damage and T2 launchers get 50% damage boost so they are even more cost effective than T2 ones.

Although they are very good at destroying targets with precision and overwhelming shields and TMDs, it is advised to use T3 Mobile Heavy Artillery or other artillery units instead in destroying large numbers of units because of their AoE and that their fire cannot be countered other than by shields. This is especially true against a Seraphim opponent that spammed T3 shields. It is recommended to carry Spearheads for overwhelming their shields, along with T3 MHAs to destroy everything inside once the shields are down. Only use Spearheads for destroying targets of high value, such as volatile resource generators, ACUs and SCUs, that can cause damage from the inside.

If possible transport a spearhead or flapjack behind a mountain thats small enough for the missile to travel over, large enough to stop enemy land weapons from hitting it and the mountain must be behind a enemy base. Also provide AA support and close fire support. Keep firing and adding units to your army until nothing is left of the enemy base. 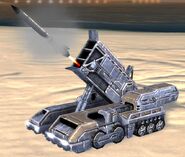 A Spearhead Launches a Missile

A Spearhead fires its missiles
Community content is available under CC-BY-SA unless otherwise noted.
Advertisement