The UEF T3 Heavy Assault Bot, nicknamed the Titan, is a UEF unit. This is a direct fire unit.

Not merely capable in the field, this unit can use "Hit and Run" techniques when micromanaged, to take advantage of its Personal Shield Generator. A Titan'spersonal shield takes about 60 seconds to recycle when depleted. A Titan's Commander can use this to his advantage to strafe an enemy base, and then hide out of range and wait for regeneration. This also puts it above the more powerful Cybran Loyalist. The shield provides fantastic front line healing that would otherwise require an engineer and lots more time to accomplish. Simply lather, rinse, repeat until the defenses are broken. You can turn off the shield to stop the constant energy drain.

The Titan can be used to assassinate enemy SCUs or the ACU, and still remain on the field, because their personal shield will prevent all or most damage from the ACU's meltdown. If necessary, the Titan may be commanded to move out of enemy firing range or the blast zone, and wait till their shields regenerate, or additional backup arrives to finish a crippled base. (Note that any other friendly units without personal shielding will be annihilated from a SCU/ACU meltdown, even those under a T2 Mobile Shield Generator and the Shield Generators themselves). Because of their shielding, Titans are also capable of surviving strategic nuclear detonations, making them ideal for "Blitzkrieg" style attacks to ensure a quick mop-up.

It is vital to note that units with exceptionally high single shot damage, such as Tactical Missile Launchers, and T2/T3 Artillery, are still capable of destroying a shielded Titan in a single shot. Also note that the Titan must regenerate its shields after it disembarks from an air transport.

Until the advent of Forged Alliance, it was the only shielded T3 Assault Bot. Now it must share that honor with the Mk IV Harbinger. When paired with the UEF T2 Mobile Shield Generator, the Titan makes for a very resilient tool for smashing enemy defenses. The other difference between the Loyalist and the titan is the fact that the Loyalist's disintigrator pulse lasor lends it a much higher initial shot damage, which also might make it prone to overkill.

"Aside from experimental units, the Titan is the biggest, toughest unit in the UEF arsenal. It features dual Heavy Plasma Cannons, giving it an unprecedented level of firepower."

Since the release of Forged Alliance, the Titan has seen a significant drop in popularity, as many UEF players eschew it in favor of the new Percival T3 Armored Assault Bot. However, the Titan still has a place on the battlefield. Despite its much higher DPS and durability, the Percival suffers from a lack of splash damage and a low rate of fire, making it comparatively ineffective against large swarms of T1/T2 units. The Titan can be deployed in twice the numbers of the Percival and its rapid-firing Heavy Plasma Cannons cut through hordes of lesser units like a hot knife through butter. The Titan is not amphibious like the Percival, but it moves at twice its speed, making it an effective counter to faster-moving units and useful as a raider. A combined force of Titans and Percivals is formidable, with the Titans taking care of individual units, and the Percivals levelling point defences or AA as part of a SEAD strike. 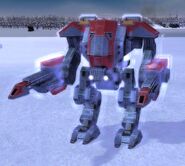 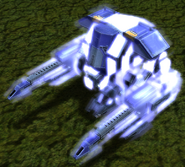 Titan with its personal shield

During E3 2007 when Supreme Commander was announced for the first time, Titans' backs carried single Tactical Rocket Launchers designed to engage very large groups of T1/T2 units, making it capable to fight all around including air units, making it the probably most overpowered non-experimental unit. But due to balancing reasons, developers decided to remove the weapon.