Though it has a weaker shield strength than its Aeon counterpart, the Parashield has more Hit Points (though T2 and T3 units will still make short work of it) and is cheaper and takes less time to build than the Asylum. Because they require less power than stationary shield generators, the Parashield makes a good temporary defense for fixed positions and point defense until permanent installations can be constructed. While not strictly inferior to the Aeon Asylum, they are inferior on a 1-to-1 basis, requiring more Parashields to provide the same amount of shield energy in coverage. In terms of gameplay, the Parashield is arguably a more versatile unit in pure land battles, but a less versatile one in sea battles, as it cannot hover. The ratio of energy consumption versus shield health is 1:40 for both the Parashield and the Asylum. They are cheaper (mass, energy and buildtime) than their aeon counterparts and not hovering could be seen as an advantage on land only maps because hover units often make a mess of pathfinding, and this is a real problem with large armies. so overall this unit is equal to the Asylum. This is especially true in areas where attack bomber runs are targeted, as the Asylum will die if anything heavier than a T1 Air Scout or Interceptor crashes on it, whereas the Parashield wil survive the 100 air crash damage.

"The Parashield makes use of the latest generation of UEF Pulse Shield Generators. Mounted on a mobile chassis, the Parashield is extremely useful in protecting moving units." 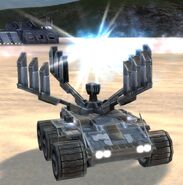 Parashield Shield Dome
Add a photo to this gallery
Retrieved from "https://supcom.fandom.com/wiki/UEF_T2_Mobile_Shield_Generator?oldid=43327"
Community content is available under CC-BY-SA unless otherwise noted.