The UEF T2 Mobile Missile Launcher, nicknamed the Flapjack, is a UEF unit. This is a tactical missile launcher.

The Flapjack is armed with a Long Range Cruise Missile. It possesses high damage and long range.

The Flapjack is the best MML in the game, due to higher Hit Points, higher overall damage per second, and better accuracy than the Evensong. The Flapjack outranges all Tier 2 defense systems, and is a useful addition to any land assault force. It is able to strike outside of its viewing range, so radar coverage or the use of spotters is required for best effectiveness. The missiles themselves home in on their targets, ensuring devastating strikes on inbound targets when used defensively. Since the Flapjack is able to fire on the move, a solid defensive strategy is to set them on a patrol path around your base perimeter, making them harder targets for enemy bombers and artillery.

The Flapjack, like the other T2 missile launchers, are very potent commander killers in large groups if your opponent leaves his ACU on the front lines. The homing capability was removed in Forged Alliance.

"With it's Tactical Cruise Missiles, the Flapjack has almost twice the range and firepower of the Lobo. It also features heavier armor and a stabilizer system that allows it to fire when on the move." 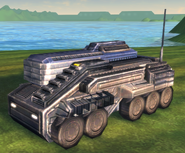 A Flapjack fires a missile.
Add a photo to this gallery
Retrieved from "https://supcom.fandom.com/wiki/UEF_T2_Mobile_Missile_Launcher?oldid=43325"
Community content is available under CC-BY-SA unless otherwise noted.