The UEF Mavor : Experimental Artillery is a gigantic experimental artillery piece that uses Anti Matter Artillery to bombard any target anywhere on the map with a high degree of accuracy and deadly efficiency. It is one of the most expensive units in the game, but once built, it is essentially a game ender.

The Mavor is the only strategic artillery piece available in Vanilla Supreme Commander, as it is capable of firing at any ground target on the map due to its almost unlimited Range. This, of course, excludes any target within its large minimum range. On land maps sized 81 km, it can cover all land patches if built. The Mavor shells are very accurate and powerful, and also have a very large damage radius. Because of this, the Mavor can destroy any building in one to two shells. Any shields protecting the building will be quickly dealt with. Further, thanks to the large damage radius, the Mavor can efficiently break through any shield patch.

Because of the shell's high air time, the Mavor is inefficient against mobile units. However, any non-experimental land unit hit by a Mavor shell will be immediately destroyed. Experimental units will receive massive damage, and the Mavor can sometimes also hit flying experimental units, with a little luck.

The only time the Mavor has a maximum range is on the massive 81x81 km maps, but this does not usually get in the way of anything.

The Mavor is quite fragile compared to other experimentals and artillery platforms so be sure to keep it well protected, preferably with multiple Heavy Shield Generators and several T3 SAM Turrets to watch for T3 Bombers.

As a game ender unit, once built, the Mavor can destroy any building on the map. To get the most efficient use out of the Mavor, destroy the most important buildings, the other game enders, and strategic missile launchers. Anything else is a waste of the units capabilities. Once these threats are gone, tell the Mavor to destroy the opponent's ACU. This can create several scenarios:

In the single player campaign of Forged Alliance, the Mavor can be very helpful for breaking stalemates, especially in the last mission. A few Mavors can destroy the Seraphim Quantum Arch without you even realizing it if you don't give them alternative fire orders. This is only possible due to the low intelligence of the computer AI, however, and you should expect a human opponent to target your Mavor the moment it is scouted in a real game.

Every second you don't destroy the opposing ACU, you are giving the opponent a chance for a sneaky win or tie. When the opponent sees you have a Mavor he will probably react with an all-or nothing attack. Don't give your opponent the chance to pull it off. Don't play around; win the game. If you don't, you might regret it.

The Mavor has the longest build time of any other unit in the original game (a single T3 Engineer would require more than an hour to build it), as well as the highest resource cost in the game (over 300,000 mass, however it has since been supplanted as the Seraphim's Yolona Oss has an even longer build time and is even costlier) meaning the player must have a very advanced economy running to try build the Mavor without having the entire base paralyzed by lack of resources. However, if and when finished, the Mavor is essentially a game-ending unit, making it well worth the price. 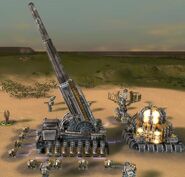 A UEF Mavor prepares to fire at an enemy base]]

Overlay display of the Mavor's 'unlimited' range. The unit is positioned in the top-right corner of the map.
Add a photo to this gallery
Retrieved from "https://supcom.fandom.com/wiki/UEF_Experimental_Artillery?oldid=43121"
Community content is available under CC-BY-SA unless otherwise noted.