The UEF Armored Command Unit is a UEF unit. This is a command unit, as well as a direct fire unit and economic unit. With upgrades, it can become a tactical missile launcher and/or a defense unit. It is also the only ACU among all factions that can become a strategic missile launcher. The UEF ACU is ineffective in combat when T3 or higher enemy units are present on the battlefield. Subsequently, the UEF ACU should shy away from combat under these circumstances.

The UEF ACU is the most armored ACU, but possesses the weakest firepower. Also, because of its low muzzle velocity it has more difficulty hitting moving targets than other ACUs. 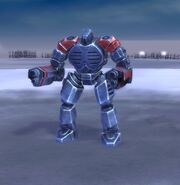 Add a photo to this gallery
Retrieved from "https://supcom.fandom.com/wiki/UEF_Armored_Command_Unit?oldid=43217"
Community content is available under CC-BY-SA unless otherwise noted.