T3 Strategic Missile Launchers are static units that launch Nuclear Missiles, which are devastating wide-area attacks from an extreme range. They are often deployed and launched late in the game when the players' economies are well established.

Strategic Missile Launchers (or SMLs) are designed solely to cause extensive damage to an area, especially towards enemy installations, dealing 70 000 damage. The explosion radius is the same as that of an ACU core, a 30 radius area. The missiles travel to stratospheric altitude, rendering them immune to all AA attacks while being able to penetrate any shield setup, making them one of the hardest attacks to effectively defeat.

However, they are extremely costly and take a while to build but this often not the case especially when players' economies have been fully developed by the time they become available.

The Launchers themselves have a hefty cost of 15000 Mass, as much as a Cybran MonkeyLord. It also actually takes relatively little time to construct. Concentrate more on keeping a solid Mass income rather than providing additional engineers. When built, the individual missiles then have to be built before they can be used (which add to the economic strain as well).

Each strategic missile costs 12000 Mass and takes 5 minutes to build. Although it is possible to assist the launcher, it is usually not recommended as it has a high internal build speed.

Because of this high cost it is advised to keep the launcher on manual construction, as the mass drain from automatic construction may have an unintended effect on the economy.

Keep in mind that a strategic missile launcher will detonate for 10000 damage within a radius of 6 when destroyed. Take into account where to build around this as the blast damage may take out key structures or even cause a chain reaction if it destroys energy producing units or storage.

The only defense against SMLs are Strategic Missile Defenses. SMDs are very efficient, being able to divide and conquer when multiple nukes enter the effective range of SMDs placed in the vicinity of each other.

As such, SMDs become a serious problem if they have the economy set up to sustain effective protection.

There are almost no statistical differences between the factions whatsoever; however, the launch time of the missile varies significantly. Below are approximate launch times for each faction's missile:

As is apparent, it takes an Aeon strategic missile approximately 3x longer to exit the launcher than the UEF variant. When attempting to snipe a commander or group of enemies, these extra seconds can mean a large difference in outcome.

An exception worth noting is that the Cybran missiles are equipped with EMP warheads, briefly powering down all structures within the blast.

Each faction's warhead has a cosmetically different bloom upon detonation, adding thematic detail to an already awe-inspiring event.

Just in case anyone wonders, all T3 strategic missile launcher stores up to 5 missiles, while the experimental Seraphim Yolona Oss stores only 1 at one time. 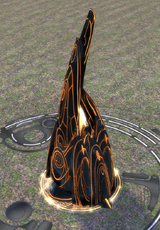 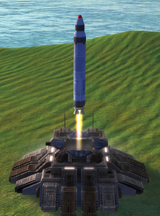 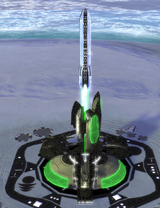 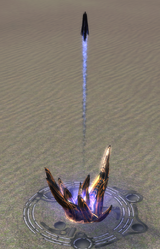 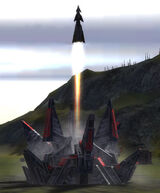 The Results of a Nuke on a Small Map. AKA Whiteness.