Armored Assault Bots are T3 bots which are significantly more powerful and expensive than other T3 units, so much so that some refer to them as "Tech 3.5".

The two Tech 3 armored assault bots are the UEF Percival and the Cybran Brick. Both are amphibious, and both have significant range.

The Aeon Illuminate and Seraphim do not have armored assault bots but have Sniper Bots instead.

The UEF Percival is more prone to overkill due to its initial shot damage of 1600. It also has a much lower ROF than its Cybran counterpart. It does, however, have more HP and DPS than the Brick.

The Cybran Brick has a greater rate of fire and is, therefore, better for facing groups of T1 or T2 units. It is also much better suited for crossing water safely, as it has a torpedo system and flares. A group of ten or more Bricks will have decent self defensive cababilities, though they should not be given a combative role.

The UEF Percival can be an alternative to the Aeon and Seraphim's Sniper Bots. They have the same build time but cost 75% more energy and 60% more mass. They have about 20 times higher health, 3 times higher DPS and similar damage to an Aeon Sniper Bot (in between the two modes of the Seraphim Sniper Bot). In some ways, the Percival is a shorter-ranged sniper bot.

In direct combat, one UEF Percival will beat one Cybran Brick, but the Percival’s low rate of fire will increase its vulnerability when facing large groups.

Just a few T3 bots whilst firing at the same oncoming experimental can seriously change the course of the attack. Having some T3 bots inside your shields mixed with turrets can really overwhelm approaching experimentals, so having these is an absolute must later in the game.

Cybran and UEF against experimental units.

Bricks are not excellent against experimental units directly since they would most likely die before getting enough damage off. The Percival, by contrast, if built in numbers to match mass cost of the experimental they'll be fighting, will beat the Monkeylord, Galactic Colossus, and with some micro the Ythotha in direct combat. Air dropped to surround it, they can beat a Megalith.

Armored Assault Bots are useful for escorting or defending against experimental units.

These units, while substantially more powerful than a standard unit, are also substantially more expensive. On the flip side, a handful of these units can hold their own against an experimental unit. It is not rare to see a Cybran Monkeylord destroyed by a group of Percivals. Percivals are particularly effective against Fatboys: armored enough to take the Fatboy’s massive damage output until they are inside the shield and can take one or two final shots. A group of twelve or more should take out a Fatboy. In fact, these units are the missing level between Tech 3 and Experimental. You should build them if your economy is strong enough, but can't build any experimental units yet.

The Brick is very capable of carrying out attacks with very little escort, but it is important to remember that Percivals only fire once every 4 seconds, so it can be killed by a surround of units, even tech 1 units. Escort for Percivals is absolutely necessary, therefore, unless you have enough Percivals to deal with a swarm of units. Titans are excellent escorts for Percivals, thanks to a much higher rate of fire, shielding, and the ability to chase down escaping units, including faster experimentals if need be.

An interesting thing about armored assault bots, and submersible land units in general is that they can fire while semi-submerged, as long as their firing point is out of the water (for Percivals, their shoulder-cannon, and for Bricks, a little red dot that kinda looks like an eye) they can target and destroy units on land, but those units cannot target the armored assault bot. This includes air units, excluding the Torpedo Bombers. 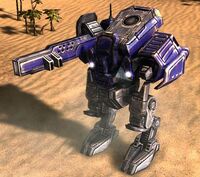 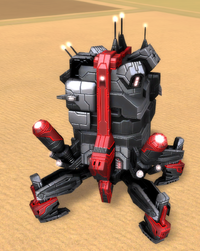