The Tech 3 Air Superiority Fighters (often abbreviated as ASFs) are the most powerful fighters that you can build in the game. They have enough power to be a highly mobile defense force capable of taking out even experimental units, at a (relatively) affordable cost. However, these units have a somewhat hard time targeting slower units (with the exception of the Gemini, which has missile systems), and can be taken down by the Restorer easily. That said, these units are effective in many situations and can be a tremendous help to any commander in need of defending against air attacks. Note that interceptors can be a more cost effective solution to enemy air units, as they can take down ASFs 10 to 1 for the same price, and fare better against SAMs, but have less fuel and veterency, take up more population space for the number to be effective, and cannot dodge flak as well as the ASFs can.

The Cybran Gemini has missiles, as opposed to the plain direct fire weapon mounted on the other ASF's. This results in less shots missed and leads to a higher Effective DPS. It also should be noted that when fighting above or around hills, the Gemini's missiles are more likely to hit the terrain than the other fighters. This could negate the advantage or even work against the Gemini.

“The next evolution in UEF fighter technology, the Wasp is armed with two Rapid Pulse Beam systems. These beams are designed to inflict maximum damage against lightly armored enemy aircraft.”—Wasp Vanilla SupCom description

The Cybran and UEF ASFs have two 200 DPS weapons, while the Aeon Corona and Seraphim lazyne each have one 405 dps weapon. The UEF ASF has the most health, Seraphim the second, Aeon third,and the Cybran ASF has the least health. The UEF ASF also has the highest initial shot damage of all the factions. This is balanced out by the slightly slower rate of fire. This is only significant when taking on slow or stationary targets, as this will occasionally allow one to take out the target in a single pass, when a fighter with lower initial shot damage would not have done so--making it open for return fire. This makes it good against gunships and higher tier units, but not as effective against massed lower tier units, which is why T2 fighter-bombers should still be around in numbers.

“The Gemini features a Nanite Missile system that fires volleys of small missiles in a spread to maximize hit probability. It has more armor than the Prowler, but is still a relatively light unit.”—Gemini Vanilla SupCom description

The biggest difference is that the Cybran Gemini is equipped with stealth. This means other fighters and SAM batteries cannot shoot at it when it is outside visual range, unless it is in range of an omni radar system. Also, it can sometimes fire two missile volleys in one run on a target, and it has been observed taking down other ASF's with around 450 health remaining. It is to be noted that the Cybran Gemini is, in fact, able to take down Restorers cost-effectively assuming radar coverage for both sides but Omni for neither in the area, as a lone Restorer, worth 1200 mass, will take down one 400-mass Gemini and then be killed in a few shots by the second due to its Stealth advantage. Even without the advantage, one Gemini can reduce a Restorer to 1/2 Health before dying, a pointed contrast to other ASF's. It also has tracking projectiles, making it more accurate. Overall, the best early ASF is the Gemini, but omni sensors render its stealth obsolete. It is good for defending bases out of enemy omni range, though.  The Gemini's missiles almost never miss and have a huge damage per shot.

“The Corona is the first attempt to integrate Seraphim technology into an Aeon unit. The Corona's Quantum Displacement Autocannon fires a bursting shell, much like flak.”—Corona Vanilla SupCom description

The Aeon Corona is able to dodge T1 AA and T2 flak very well, and the Seraphim lazyne has been known to dodge T1 AA and sometimes SAMS by the openings in its design. The Corona and lazyne are practically the same, but the lazyne has about 50 more health, making it a bit better for fighting T1 air. However, the Aeon can supplement the Corona with a few Restorer T3 Gunships. The lazyne is unique in that it doesn't leave a trail when it moves, unlike its human counterparts. Thus, it can be a bit harder to locate it if you don't have radar or line of sight on it. However, it is generally agreed that the Gemini is the stealthiest ASF.

The Corona can turn its turrets 35 degrees relative to its front, making it possibly the easiest to micro ASF and the most powerful.[1]

Naturally, you should use ASFs to fight off enemy bombers or transports, or to protect your own. However, interceptors are more cost-effective, but are slaughtered by flak and have low fuel.

It is not common knowledge that the ASF's can have movements micromanaged to get behind enemy ASFs and get more hits. Some ASFs are observed to turn differently such as at different angles and such. This means that even if an ASF has more health or DPS than another, it can be microed to negate this advantage. 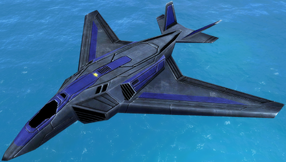 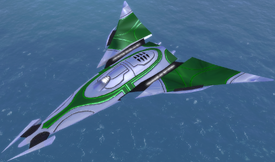 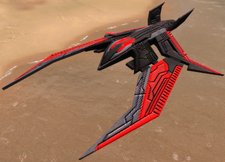 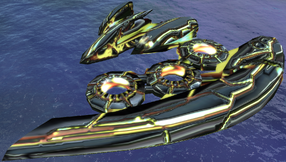