At 450 mass, torpedo launchers are rather expensive to deploy in the early game, but their heavy firepower and (relatively) high HP make them excellent at stopping enemy fleets. They outrange all T1 naval units. Any lone units moving into their firing radius will be heavily damaged or destroyed. All but the biggest fleets will be destroyed by this defense unit.

Although the T1 torpedo launcher inflicts about half as much DPS when compared to a T2 torpedo launcher, their short range makes them almost useless against T2 ships or higher. At about 40% the cost of their T2 equivalent, it is almost always more profitable to opt for the tech 2 version, if your economy allows it.

In a pure comparison of DPS versus cost, these units are actually slightly more effective than their T2 counterparts. One of the times you should consider building T1 torpedo launchers rather than T2, is to stop non-hovering amphibious units (Galactic Colossus, The Brick, etc). These have few ways to retaliate, and must come into range when approaching the shore. Otherwise, there are few reasons to build this unit in the mid- to late-game.

The four Tech 1 Torpedo Launcher are the UEF DN1, the Cybran Scuttle, the Aeon Tide and the Seraphim Sou-atha. These units all have the same cost, range, and muzzle velocity, and almost equivalent HP. They do have different rates of fire and damage per shot. The Cybran Scuttle has a substantially higher damage per second than its counterparts in other factions (94 vs. 75). The Cybran and Seraphim versions also fire three torpedoes in each salvo providing them with an edge in overwhelming anti-torpedo countermeasures, while the UEF and Aeon fire only two. 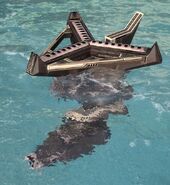 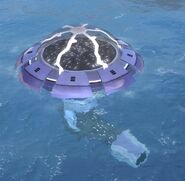 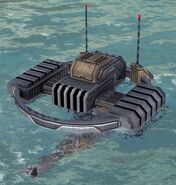 UEF DN1
Add a photo to this gallery
Retrieved from "https://supcom.fandom.com/wiki/T1_torpedo_launcher?oldid=42985"
Community content is available under CC-BY-SA unless otherwise noted.