The Tech 1 Mobile Anti-Air Guns are cheap mobile low- end AA defense. They do not have a very high DPS, but are very cheap and can easily be built in large numbers.

The four Tech 1 Mobile Anti-Air Guns are the UEF Archer, the Cybran Sky Slammer, the Aeon Thistle and the Seraphim Ia-istle. These units all have the same cost, health, range, and about the same damage per second. The things that set them apart are different rates of fire, number of shots per salvo,speed, and projectile damage (among other things). The Cybran Sky Slammer's Nanodart Launcher has the ability to attack land units and track air units; This ability makes it the most versatile of the T1 mobile AA units.

Some players argue that the Sky Slammer is the best of the four units due to its tracking missiles and superior DPS to the Thistle (16 vs 15), in addition to being second fastest (barely slower than the Thistle but far outpacing the Ia-istle) and having a ground-attack mode to (somewhat) fend off irritants such as Land Scouts or Light Assault Bots (better hope the other player is not micromanaging or strafing though, or you'll miss continually). However it must be noted that the Sky Slammer only has 65% of the others' in HP while costing the same, and it has less range than other anti-air guns, but this is counterbalanced by the fact that its missiles can follow air units out of its range. Aeon commanders should note that the Thistle does not hover, so it cannot be used to escort T1 amphibious tank assaults; T2 anti-air or interceptors are needed for this purpose. It does have more health than the Aurora, to support it during land based assaults.

It should be noted that the Sky Slammer's darts have a slower speed-up than most AA missiles, and thus are slightly less effective against aircraft than the other factions' T1 mobile AA units. This is counterbalanced by the fact that the darts are guided and can be switched to attack ground units, however in ground attack mode they lose the tracking ability.Also, the la-istle is the slowest T1 mobile AA.

"An Incredibly fast rate of fire and good turret tracking capabilities makes the Archer a great defense against all but the fastest air targets."

"The Slammer incorporates a new Nano-Dart system, which fires a small rocket-propelled dart that has exceptional speed and homing ability. The Nano-Dart can also be set to fire on land targets."

"The Thistle sports a fast firing sonic pulse battery. This weapon is designed to disrupt the lighter armor found on aircraft and cause critical structural damage." 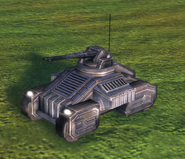 Aeon Thistle
Add a photo to this gallery
Retrieved from "https://supcom.fandom.com/wiki/T1_mobile_anti-air_gun?oldid=43320"
Community content is available under CC-BY-SA unless otherwise noted.