The Tech 1 Anti-Air Turrets are low-tech fixed base defenses. They are relatively cheap to build, and are effective against T1 attack bombers (and, in numbers, against the slower T2 and T3 aircraft).

As initial base defense Edit

While T1 AA turrets provide decent protection against slow moving aircraft (such as T1 bombers, transports, or gunships), their muzzle velocity is too low to hit faster units. They are effective at hitting gunships, but their low DPS makes them somewhat unsuited for the task.

Many players prefer to build multiple T1 mobile anti-air guns for base defense instead. They provide an overall better DPS for lower costs, and are mobile.

Furthermore, since the T1 AA turrets don't have a blast radius like flak does, you should switch to building T2 anti-air flak artillery, which is much more effective for air defense.

Once their economy is up and running, some players like to build batches of these anti-air turrets, as they are quite effective in groups against gunships. While this is somewhat effective, T2 anti-air flak artillery (or multiple T2 mobile AA flak artillery) is much better suited for the task. Neither one will be able to hit T3 air superiority fighters or spy planes effectively, nor will they have enough damage output to stop a T3 strategic bomber strike, requiring a more costly anti-air solution.

One of the two real reasons is to use these in the late game is a hasty defense set-up for new bases until better AA can be built.

The other reason is that due to their low cost and build time, they may be built en masse to potentially whittle more tougher gunships or to provide anti-air protection to remote bases. outposts or mass extractors deep in friendly territory, away from the front lines.

The four Tech 1 Anti-Air turrets are the UEF DA1 Railgun, the Cybran Tracer, the Aeon Seeker and the Seraphim Ialla. These turrets all have the same cost, health, range and weapon muzzle velocity. They do have a different rate of fire, but their damage per second is almost equal. 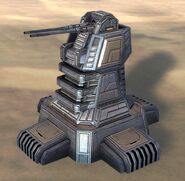 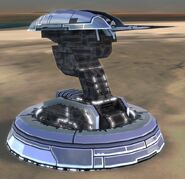 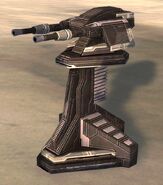 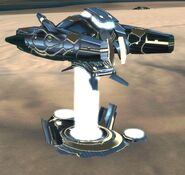 Seraphim Ialla
Add a photo to this gallery
Retrieved from "https://supcom.fandom.com/wiki/T1_anti-air_turret?oldid=42818"
Community content is available under CC-BY-SA unless otherwise noted.