Interceptors are often produced in vast numbers to fend off enemy air-to-ground attacks. They also respond to deny the enemy T1 air scout intel, or drops by T1 light air transports in otherwise hard to access areas. It is almost always helpful to have some interceptors ready to defend these targets, such as the ACU or key factories. Note that as with other T1 air units, interceptors have an extremely high energy cost and relatively low build time meaning they are slower to deploy than equivalent T1 air units, although this is less than the exorbitant cost of T2 air or early ACU upgrades.

Interceptors are pretty cheap in mass to build (although still as much as a tank overall, this is spread out over twice the equivalent build time) , and more efficient in numbers. However, when planning production note that they have a longer firing range than their vision radius, so adding air scouts to their rank will increase their effectiveness. A good guideline is to mix one scout in with every five to ten interceptors.

Interceptors fare well compared to other tech 1 anti-air solutions, thanks to their high mobility and reactivity, and will only go down under sustained fire. However, it is important to micro interceptors so that they can get more shots off, compared to using ground-based AA guns or frigates/attack boats.

Interceptors are sometimes used to replace scouts due to their superior survivability. They have a better chance of coming back alive from over an enemy base. Furthermore, once in sufficient numbers, they can cover enough ground to replace scouts and reduce micro-management.

Against defensive turrets, even firstly the T1 anti-air turret it is not wise to fly over them as they will whittle down interceptor numbers quite quickly. Next, they will get decimated by tech 2 flak fire, mobile or not, so avoid these at all costs! Against T3, by comparison Interceptor squadrons actually fare pretty well against SAM turrets, but this is only because of the SAM's low rate of fire, combined with complete overkill, which severely decreases the SAM's effective DPS. The

hey can beas a distraction (like a radar jamming formation of sorts) to absorb hits directed at more important targets in same airspace such as a friendly transport too. used

Because interceptors come with only 5 minutes of fuel, it is not recommended to have them blindly patrol around your base. Fuel-less interceptors are virtually sitting ducks to all other forms of anti-air, as not only do they fly at a fraction of their speed, they lose the use of their weapons. If there is no air staging facility, interceptors can periodically land somewhere out of harm's way so that they can regenerate their fuel. Once there is refueling base, interceptor spam can get patrolling again until there are T3 Air Superiority Fighters available.

They are used to siphon off excess energy when not producing T2 upgrade and so avoid energy waste without affecting nominal mass expenditure too much. For example An unassisted T1 air fac drains a mere 2m/s producing interceptors. At T2, shields are more effective use of spare power. At T3 power is nearly unlimited, paving the way for ASFs.

However note that generators cost mass themselves so it is not necessarily wise to build generators solely for interceptors. It is advised to plan ahead to some other goal with the energy first, such as T2 air gunships, ACU combinations, or fast T3 upgrade land rush.

If all interceptors are lost then strategic air control will be handed over to the enemy, allowing them to perform the noted air to ground tasks. Therefore it is wise not to cede too much production if possible, as flak can only go so far to respond to enemy threats in terms of response time and area coverage/speed. In order to do so it will be necessary to scout the enemy's base with vision and determine how many air factories they have and compensate accordingly to not fall behind. Any unit advantage tends to scale quadratically, so gaining a foothold with a good fight or delaying enemy air factories will allow the player more air control themselves, and hence more friendly bombers. Eventually if the advantage snowballs too far one player may have so many interceptors the enemy's production is instantly shot down, making them be locked out of the strategic air domain entirely and forced to use local flak for protection at a tactical level only. And on the offensive, likewise depriving the enemy of their harassment bombers.

Overall maintaining strategic air superiority is a combination of matched production and taking good fights, and obtaining the state has various benefits for that player in terms of flexible A2G attack and transport options.

“The standard UEF Interceptor, the Cyclone is a fast, maneuverable craft that sports linked Anti-Air Railguns as its armament.”—Vanilla SupCom description

“The Prowler is a state-of-the-art air-superiority fighter. Its Autocannon sacrifices damage for a high rate of fire and accuracy, literally tearing its target apart with hundreds of rounds.”—Vanilla SupCom description

The four tech 1 interceptors are the UEF Cyclone, the Cybran Prowler, the Aeon Conservator and the Serapim Ia-atha. These units are mostly equal stat wise, except for minor HP differences, and weapon differences (ROF, mostly, but equivalent effective DPS). While in the original supreme commander, the aircraft's low amount of HP made those weapon differences stand out (The Cyclone could destroy any interceptor in one shot, but fired very slow), this is not the case in Forged Alliance. The differences are imperceptible in game, and only extreme sandbox games with heavy cookie-cutting analysis can show a difference in result. In other words: they are functionally identical.

However, in comparing DPS and health, la-atha is the best, with the cyclone a close second, conservator in third, and the prowler in fourth, however, a few players claim the prowler and the la-atha are the hardest to hit, due to their thin profile. 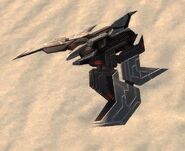