The Seraphim Experimental Bomber, nicknamed Ahwassa is a Seraphim air unit. It is very fast for its size and equipped with massive fuel cells, giving it unlimited air time. It is the most expensive air-based non-game ender in the game. It carries anti-air guns for defense against other aircraft, and drops a negative energy bomb capable of completely ravaging a small base, or an army. Unupgraded UEF and Seraphim ACU's are able to stand up to a single attack by the Ahwassa, with 12000 and 11500 HP respectively. The bomb deals 11000 damage, so it will destroy a stock Cybran or Aeon ACU if the bomb is dropped directly onto it.

The Ahwassa is equipped with 3 Anti Air cannons, giving it effective Air defense too. It has 52000 HP, and regenerates 25 HP per second. When destroyed, it has a very powerful Air Crash doing 10000 damage, a similar blast to the Air Crash of the Aeon CZAR. However, due to its speed and momentum when it is destroyed it is impossible to use the air crash as a precision weapon to crush targets like the enemy ACU, unlike the CZAR which will fall on top of anything it is directly over when destroyed.

The true power of the Ahwassa is its speed, 2 1/2 times that of the CZAR and the Soul Ripper, making it by far the fastest experimental in the game. This also makes it far more durable than either of the other 2 fliers, despite having only slightly more HP than the CZAR; its speed makes it more resistant to the ASF "strafing runs" that destroy the slower experimentals in only a few passes, as the ASFs are forced to chase the Ahwassa in order to attack it, allowing its AA defences to pick them off as they catch up. Additionally, since it deals all its air-to-ground damage in a single shot, it doesn't expose itself to unnecessary fire from ground AA emplacements (especially the slow-firing SAM launchers), where the hovering CZAR and Soul Ripper rapidly become fodder to multiple shots. The only reliable way to prevent yourself from taking damage from an Ahwassa is to intercept it in open space with a large cluster of ASFs as far out from your base as possible. T2 flak units are not effective due to the Ahwassa's ability to destroy 118 acres of them in a single pass. On the other hand, the Ahwassa is less effective than the other air experimentals against large single units like other experimentals or naval units, due to its low DPS.

This bomber has a very low firing rate and a broad turning radius. The low firing rate means that it is almost completely useless against a well-shielded base, as the shields will recharge before the bomber can make another pass. If the bomb hits shield it will do no damage to anything. It is best to recon the target area, select a priority target, and destroy it on the first pass. The bomber will not be able to drop two bombs on the same target in any reasonable time, so a wise tactic is to send 3 or 4 T3 bombers in for cleanup in case the Ahwassa fails to completely destroy its objective.

Because of how it turns, the Ahwassa becomes vulnerable to just about anything as it turns. Make sure that it does not turn in the path of T3 artillery emplacements, as it can and probably will get hit if it shoots--you may want to force the bomber to move away from them It will take longer for the Ahwassa to take a second shot if you manually set a path, but it will be much safer than letting it turn on its own.

This unit is also great for breaching defenses so your ground forces can advance.

As with any Bomber, the Ahwassa can damage submerged units if it does not attack them directly, but rather attacks another ship near them. See the page on Bombers for more information. With a damage radius of 20, this is something you should really take advantage of by forcing fire next to your target. This is especially useful when an ACU tries to flee in the water when you attack, leaving the safe shields only to find that you know how to force-fire.

But unlike attack and strategic bombers, the Ahwassa's bomb can indirectly attack units on the sea floor, even in the deepest bodies of water. If you find an amphibious attack (especially experimental units) escorted by surface units that you can target, or if the force is near an enemy building, take advantage! It will especially help if you have no other way of preventing a surprise attack from amphibious units or a surprise naval attack. 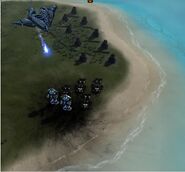 The Ahwassa launching its deadly cargo

The Ahwassa devastating a foe with its high-yield bomb.
Add a photo to this gallery

1. To ensure a successful strike against a well shielded base, use a few strategic bombers to bring down the shields, with the Ahwassa traveling behind them to strike as soon as the shields are downed. Or, if your economy can take it, use 2 Ahwassas, which will work better against heavily shielded bases.

3. The Ahwassa excels in eliminating massive amounts of T3 units to ease a ground assault.

Retrieved from "https://supcom.fandom.com/wiki/Seraphim_Experimental_Bomber?oldid=42803"
Community content is available under CC-BY-SA unless otherwise noted.