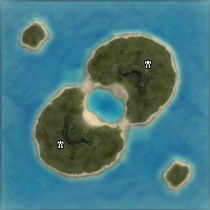 A map is where the battles take place. Each map has its own terrain, with specific places where mass extractors and hydrocarbon power generators can be placed and where commanders begin the battle.

A map has a dramatic effect on the battle. It determines which units are more effective, where the lines of battle are drawn, and how quickly or slowly each side's economy can grow.

See the maps category for a list of maps in the game and some analysis of their features.

This page features maps created by GPGNet and built into the game. Many of these maps are used for the single player campaign. Others are used for multiplayer matches.

The following tables contain a list of maps that can be found in Supreme Commander. Ranked maps are currently out of date.