Edit
watch 01:36
We're Getting Mutants in the MCU - The Loop
Do you like this video?
Play Sound

This is a list of members of the Cybran Nation 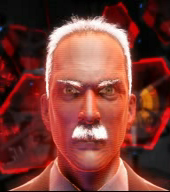 Dr. Gustaf Brackman is the leader of the Cybran Nation. An unparalleled scientific genius in cybernetics and the inventor of the "twining" process; A method of combining the power of A.I with the human mind.

He is responsible for the creation of the Symbionts and later formed the Cybran Nation when the UEF tried to enslave his creations. He shows a kind-hearted approach to his underlings, considering them his 'children' and the Commander as 'my boy'. He is an incredibly intelligent man who had lived well beyond his natural lifespan; the remnants of his brilliant mind contained within electrodes and a cybernetic brain.

Brackman leads the Nation on a war against the UEF and the Aeon in his wishes to liberate all Symboints and make them join his cause. Through his three peers; Dostya, QAI and the Commander, they eventually destroy the warring factions loyal Commanders and forward Brackman's word to their fellow peers. Along the way, Brackman's curiousity in learning has him asking to acquire Seraphim technology to study and perhaps implement their use against his enemies.

He has the Commander install a virus into Black Sun to shut down the network and places them on Earth where his last orders is to 'lead the symbiont population' before the network finally collapses in the Cybran ending.

QAI betrays Brackman and is subverted control to the Seraphim, who have began a mass invasion across the system. Losing his people to QAI, he forwards command to a new Commander and ally with the UEF and the Aeon to stand against the aliens' might. When Dostya is killed by Hex5, Brackman mourns and acknowledges the seasoned commander's loyalty to the Doctor's cause and continues with his remaining champion to finally destroy QAI.

Brackman then personally goes to Pearl II to disable and destroy QAI. However this appeared to intentionally fail, leading people to believe that Brackman intentionally gave QAI another chance, hinting that he does show mercy to his former lieutenants but does regret that he 'should never have created that computer.' Spreading rumours concerning the creation and true programming of QAI.

A machine, containing his cybernetically-enchanced brain alive, projects a hologram of him throughout the Cybran campaign. In the Cybran ending to Forged Alliance, Brackman makes a speech to the Cybran Nation stating that UEF has finally recognized their independence. However, he states that he reluctantly turned down their offer of an alliance; not eager to restart a war, but also not eager to ally with their former oppressors. 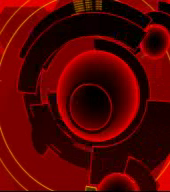 It is mentioned by Dr.Brackman in Supreme commander 2 that QAI stands for "Quantum Artificial Intelligence".

QAI is not referred to very often, but it is almost certain that he was programmed by Doctor Brackman himself, "leader" of the Cybran Nation.

The Liberation Matrix destroys the pacifying program which the UEF installed into all of the enslaved Cybrans on Earth, freeing them from UEF control.

This was almost a message that another game in the Supreme Commander series was under way; this has now been confirmed, with the announcement of 'Supreme Commander: Experimentals'* possibly being created, but more importantly the conjunction of Gas Powered Games and Square Enix to create 'Supreme Commander 2', due to release on March 2, 2010.

In "Supreme Commander 2", it is revealed that QAI could possibly be the Cybran Commander named "William Gauge", who at the end of the game is seen talking with Dr. Brackman installing a "Proto-Brain Complex" into Dr. Brackman. This is odd because in the last levels you play in the game, Dr. Brackman is viewed as an enemy of QAI. 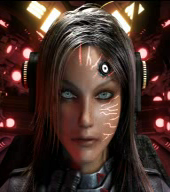 All files concerning Ivana Dostya's life before the age of 18 are incomplete; prior to that time, she resided on Earth, her AI loyalty programming fully initialized. The earliest data stream concerning Dostya is a single line mention of her "rescue" at the hands of elite Cybran Nation commandos.

Additional data streams emerge after Dostya's enlistment into the Cybran Nation military. Records indicate that Dostya's quick ascent through the ranks was only matched by her growing reputation for cunning and brilliance on the field of battle. Several of her numerous commendations specifically congratulate her on her uncanny ability to defeat her foes, no matter the odds. A cross-reference check of her service record marks her as the most successful commander ever to serve the Cybran Nation.

Dostya's current rank is Elite Commander. In addition, she serves as Dr. Brackman's personal military attaché. Service logs from Cybran military installations indicate that it is quite rare for her to personally appear on a battlefield; she directs her forces from the Cybran command post. Data concerning her husband and son appears to have been corrupted and cannot be recovered at this time. There is a large amount of evidence though including her speaking in Russian and her almost Russian accent that could mean she is of Slavic origin. Unfortunately, no more can be said since you do not see more than her neck down during the time she survives in the war. She is seen wearing a large heavy black cloak on the Cybran Victory video for the Vanilla Supreme Commander.

Dostya is killed by Hex5 during the assault on Hades. 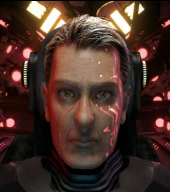 Hex5 is a traitor of the Cybran Nation. In the original Supreme Commander, he is rescued from a UEF prison and gives the Cybran Nation vital information. He seems to be a slight mix of all the enemy factions; he sounds like a Cybran and speaks like an Order fanatic, uses strategies that are a mix of Seraphim and Cybran strategies, and also may not have corrupted at will, for he may have assisted in the construction of QAI after release in the original Supreme Commander, thus making the supercomputer some power over his thoughts, since Hex5 is part-computer.

Hex5 also makes an appearance in Forged Alliance. He killed Dostya on Hades, but was killed during the assault on QAI's mainframe on Pearl II.

Leopard 11 is a commander who appears during the early UEF campaign, but is killed because of his recall beacon malfunctioning. He is also the Cybran Commander during Operation Machine Purge in the Aeon Campaign.

Mach is a commander who appears during the early Cybran campaign, but is adversely affected by the Seraphim artifact before recall. He is also fought during Operation Forge in the UEF Campaign.

Gauge is a Cybran Commander fought on Minerva (Operation Vaccine) or Procyon (Operation Entity), where he dies in the former.

Yeohi is the leader of a group of Cybrans hiding on Minerva during the UEF's assault on it in Operation Defrag. He allows the player to use his hideout's Omni Sensor upon being discovered.

Jericho is the leader of a Cybran sleeper cell first encountered on Theban II. He later returns as the player's Support Commander during the Cybran assault on Earth.

Ops is the tactical Advisor for all Cybran missions after the first mission in Vanilla Supcom.