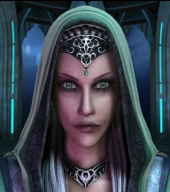 Rhianne Burke is the third Princess of the Aeon Illuminate and the current leader of the Aeon faction.

Records concerning Princess Rhianne Burke are highly classified. What is known is that she was born into a caste of seers and her lineage guaranteed that she would be a strong candidate to ascend the throne. When the previous Princess, Miranda Burke retired, Princess Rhianne assumed the throne with a great deal of fanfare.

Public records indicate that Princess Rhianne, a strong woman with an amazing amount of charisma, enjoys a great deal of support among the Aeon. However, intercepts of Aeon communication signals seem to indicate that Princess Rhianne is attempting to steer the Aeon in a new direction: the emphasis is on establishing a lasting peace as opposed to cleansing - as the Way shows it. Should the Aeon emerge victorious in the closing days of the Infinite War on Earth, Princess Burke means it as she used Black Sun to make her consciousness be one with the quantum rift and spread it to every human being throughout the galaxy, UEF, Aeon and Cybran, and to spread her message of peace, bringing the warring factions to their senses and freeing the future of war and conflict.

In the ending of Forged Alliance, the princess closes the quantum rift the Seraphim used to initially cross into our galaxy. It is still unknown if she survived, but General Hall says that "we'll keep looking." She is presumably still missing as of the events of Supreme Commander 2. 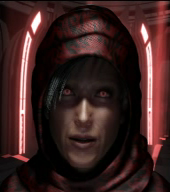 Kael (full name unknown)leads the Order of the Illuminate and is allied to the Seraphim faction.

Although Kael had hoped to become a Lady-in-Waiting, and thus join the pool of women from which the next Princess would be selected, her family forced her into the priesthood; she eventually became a member of a secretive organization known as the Order of the Illuminate.

Cold and aloof, Kael made few friends, but performed her duties with extreme efficiency and was particularly adept at maneuvering her way through the Order’s political maze. Eventually, she was selected as a permanent member of the Order’s Governing Council.

During the final stages of the Infinite War, QAI put the Order in touch with the Seraphim. It was at this stage when Kael laid the groundwork for what was to follow. Within days of the Seraphim invasion, she seized control, executed her political enemies and renamed the Aeon Illuminate the Order of the Illuminate.

Kael rules the Order with an iron fist and has labeled Rhiza and any other Aeon that remain loyal to the Princess as heretics that must be cleansed. Her paranoia is absolute, and Kael will kill anyone who draws suspicion to themselves, regardless of the circumstances.

When the rest of humanity is cleansed, Kael fully expects the Seraphim to support her as the defacto leader of any remaining humans. 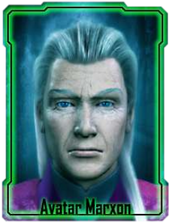 Although Jaran Marxon is one of the most feared men in the galaxy, his face is almost unknown outside of Aeon territories. However, his deeds in the service of the Illuminate are infamous. He is utterly ruthless, and when launching assaults on planets he spares no one, even civilians.

Though he originally studied to be a priest, it was quickly recognized that Marxon was a natural leader and possessed a fearsome will. These abilities caught the eye of the military and Marxon was commanding an ACU within two years, a record without equal.

Marxon earned victory after victory and it was only natural that he would become the Avatar-of-War, the highest military rank in the Illuminate. As fearsome in the conference room as he is on the battlefield, Marxon enjoys the unwavering loyalty of scores of Commanders. Some criticize his methods, but no one doubts his effectiveness. There is a reason Marxon's face is almost unknown—it is because almost no one has survived long enough to transmit it.

His ultimate fate is unknown. In the UEF ending of Supreme Commander, its presumed he was killed when the planet he was on was destroyed by Black Sun (During this sequence he begs for the princess's mercy). However in the Aeon ending it is the Princess's champion (the player) who kills Marxon. In the Cybran ending he is only seen cursing Dr. Brackman for the Quantum Gates overloading and self-destructing to create Quantum Wakes that will prevent Quantum travel for around five years, with no mention of what happens to him afterward. 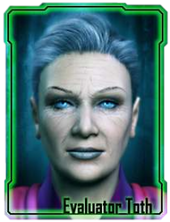 Abigail Toth is an Evaluator of the Aeon Illuminate and chief advisor to Princess Rhianne Burke.

Although she appears to be little more than an unassuming grandmother, Evaluator Abigail Toth has advised the last three Aeon Illuminate Princesses, including the current Princess, Rhianne Burke. From her position, Evaluator Toth has influenced the direction of the Aeon far more than most people realize.

She was killed by Avatar-of-War Marxon when he tried to seize control of the Illuminate. 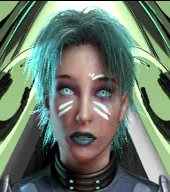 Rhiza (full name unknown) is one of the youngest members of the Aeon military to ever be promoted to the rank of Crusader. Rhiza is considered a model Commander and is held up as an example for junior officers to follow. The rest of the galaxy sees her in a somewhat different light. Her UEF file cites her unusual ferocity in battle, and her willingness to do whatever it takes to win. The files maintained by the Cybrans also highlight Rhiza's strategic skills.

Truth be told, Rhiza is a fanatic. She is absolutely certain that the Aeon Illuminate is in the right, and therefore anything that opposes them must be eliminated. Rhiza will fight to the last tank, to the last resource, to the last person. She will not stop until the very planet is reduced to a cinder. Then she will do it again.

After the creation of the Coalition For The Mutual Defence And Security Of Humanity, the Cybrans appear to accept her as a sister, like Brackman said, "We will continue to assist our sister Rhiza."

Arnold, converted from the UEF by the Princess, appears in the last few missions for all three factions. Though serving under Marxon, he supports Princess Burke because she was the one to convert him to the Way. Because of this, once Black Sun is captured in the Aeon campaign he turns on Marxon.

Ariel is a minor commander loyal to Marxon. Lured by his promises of rewards to his followers, she refuses to join the Princess on Eridani. As a result, the Champion is forced to eliminate her. She is encountered during the second mission of the Cybran Campaign as the commander of Aeon forces on Orionis, but killing her is not required to complete the mission.

Eris is a Crusader who appears as a commander loyal to Princess Burke in all three campaigns, attacking Matar in the Aeon and UEF campaigns and Procyon in the Cybran campaign respectively. She appears as an ally during the third mission of the Aeon campaign, but is an enemy in the other two campaigns.

Min is a Templar who appears as a commander in the UEF and Cybran Campaigns, attacking Luthien and Theban 2 respectively.

Add a photo to this gallery
Retrieved from "https://supcom.fandom.com/wiki/List_of_Aeon_characters?oldid=43427"
Community content is available under CC-BY-SA unless otherwise noted.