A ghetto gunship is an air transport filled with T1 Light Assault Bots (LABs for short). This forms a de facto gunship since LABs can attack while occupying a transport. It should be noted that the Seraphim have no LAB and therefore no ghetto gunship.

While any transport can be used as a ghetto gunship it is usually used at T1. This is because only Cybran players have a "proper" T1 gunship and so the ghetto gunship fills a niche for other players. Also, flak Anti-Air will greatly reduce the tactic's effectiveness from T2 onwards. Flak deals area of effect damage and will rapidly destroy the T1 LABs while they are still on the transport before they can deal significant damage. The exception to this is the UEF's T3 Heavy Air Transport which has shields to protect its cargo.

Early game: Building a transport and loading LABs and a single scout turns the unit into an excellent hunter and destroyer of initial T1 mass extractors, engineers, engineer ground escorts, and light ground units unguarded by AA or interceptors. Radar allows the transports to locate outlying extractors and engineering parties with ease while having a chance at avoiding interceptors. This unit has an advantage over LAB raiding parties in that it is not vulnerable to ground weapons and can travel significantly faster.

Ghetto gunships fully loaded with LABs make powerful weapons as they have a dps of around 126. Defensively they can do a lot to block early rushes against your base, especially rushes lacking AA. Offensively, they can be good for taking out lightly defended positions and buildings (especially radar) and for discouraging adventurous ACUs. If the ghetto gunship is about to go down it should be remembered that the unit can drop its "weapons" to continue the fight. This is not recommended against high tier units as the LABs will feed veterancy to the enemy and it may be better for all the LABs to be lost aboard the transport due to AA.

The Cybrans have the advantage of having a T1 gunship in the form of the Jester, which has its own unique set of benefits vs the ghetto gunship, but it's not better in all respects. The Jester has 25 (525 vs 500) more hitpoints, takes 1000 time units (vs 800 for a transport plus 880 for the LABs which may spend a second exiting the factory) to build, benefits from veterancy, has a speed of 12 (vs 10), longer range, and utilizes an onboard weapons system with 48 dps. The ghetto gunship has a dps of around 126, carries more fuel (13:20 vs 5:00), and has the option of added features like radar or stealth (via scouts and the Deceiver). This may be an indication that the ghetto gunship is best for offense and long ranged activities while the Jester works best in defensive and short ranged roles.

The Seraphim lack the ability to build LABs but their transports have the largest capacity among the factions (with the exception of the Continental). As a result through teamwork or kidnapping an enemy engineer it may be possible to build ghetto gunships with enchanced damage output due to the capacity for extra LABs.

This is a rather efficient upgrade of the normal ghetto gunship, as it leverages two advantages of the Cybran: the EMP-cannon of their T2 Transport and the Deceiver. Uploading both as many LAB's and one Deceiver, gives you a gunship with 172 DPS which is invisible to radar and is capable of using EMP on enemies.

The UEF alone has the ability to create a "T3 Ghetto Gunship" with the T3 Heavy Air transport introduced in Forged Alliance, the Continental.
Filled with Mech Marines (MMs for short), this ghetto gunship possesses a DPS of 654, and could sustain that for quite some time due to the 3000 (+30/sec regen) health shield (which also protects the MMs on board) and 4500 health. Its anti-air capabilities come close to those of the Aeon Restorer, with 208 AA DPS. Thus, one of these would destroy a stock ACU in less than 19 seconds.

It compares favorably with other UEF T3 air-to-ground attack units and is arguably the most powerful non-experimental air unit.
It has higher DPS (against both ground and air targets) and health (counting the shield) than the Ambassador Strategic Bomber, and the T3 Ghetto Gunship costs less in energy and time to manufacture. It is slightly slower, and costs more mass, but is a much stronger unit overall.
Its slightly more expensive than the Broadsword, but with a faster build time and the quality of bigger, faster, and stronger than the Broadsword Heavy Gunship making it very much worth the cost.

As with any Ghetto Gunship, it can drop its load of up to 28 Mech Marines before dying, though by T3 it will likely help the enemy more than it hinders them by feeding their units' veteran statuses, so this is not recommended.

Building these instead of Ambassadors or Broadswords would make an excellent force for either SEAD, ACU assassination, or Experimental hunting.

When playing multiplayer on maps such as Ophir Chasma or Island Zero, where commanders start very close together, a good strategy is for one player to start with an Air Factory, 7 engineers, air scout, 2 transports, and 5 interceptors. The other player starts with a land factory, 6 engineers, and 10-14 light assault bots, so that when they are done you can quickly build some early ghetto gunships. UEF T3 Broadsword Vs. UEF T3 Ghetto Gunship If the commander is willing to micro manage and wait a bit longer, it is obvious that the Ghetto Gunship is the superior option.

The Infamous UEF T3 Ghetto Gunship (shown with shields down) 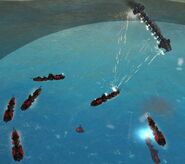 A UEF T2 Ghetto Gunship attacks a group of Trident Class ships with its riot guns and 14 Mech Marines
Add a photo to this gallery
Retrieved from "https://supcom.fandom.com/wiki/Ghetto_Gunship?oldid=42822"
Community content is available under CC-BY-SA unless otherwise noted.