The Cybran T3 Siege Assault Bot, nicknamed the Loyalist, is a Cybran unit. This is a direct fire unit, as well as a tactical missile defense unit.

The Loyalist is the Cybran Siege Assault Bot and is equipped with a Disintegrator Pulse Laser, a Heavy Electron Bolter, and a Tactical Missile Defence device that deflects missiles back at the location they were fired from. Upon death the Loyalist fires its EMP weapon, which paralyzes nearby enemy units for a brief moment.

The Loyalist has about the same HP relative what its UEF counterpart—the Titan—has in its shields and HP combined, but the Loyalist lacks a rapidly regenerating personal shield. Nevertheless, the Loyalist is highly effective against T1 and T2 armies with its rapid fire weapons and having a slightly longer range than the Titan.

Its Tactical Missile deflector can render missile launchers (mobile or fixed) almost useless, by bouncing back the missiles toward their source. Although not showing on the user interface as a (countermeasure) circle, the missile deflection ability has a radius of 5. The Loyalist TMD is less of an advantage in Forged Alliance where Mobile Missile Launchers are no longer the army killers of vanilla Supcom because missiles have lost their tracking ability. However, the UEF ACU's "backpack nuke", which is ignored by TMD and SMD structures, can be deflected back to the source by Loyalists. This is both an amusing and effective way to counter the UEF ACU nuke; see for instance this video.

Tip: A series of Loyalists can be used to delay a Galactic Colossus from advancing temporarily as the death EMP of the Loyalists on the Tractor Claws will paralyze the GC. 25 of these units can easily take out any other experimental unit that has the ability to "crush" your Loyalists. The key factor when using these against a land experimental is to put them in front of the approaching unit and constantly make sure it keeps stepping on, or attacking your bots, which means allied bombers can help take it out while it is stationary. They have extremely generous DPS considering their speed, remember if you are focusing air, these units are not that expensive and even 10 of them in your base can help you survive a Teleport-laser Cybran ACU strike or a TML assault.

"The Loyalist is the Cybran's heaviest conventional direct fire weapon. It employs a Disintegrator Pulse Laser as its primary armament and utilizes a Heavy Electron Bolter to deal with lighter forces."

A line of T3 Loyalists easily overwhelm a group of Hunters, their T1 counterparts 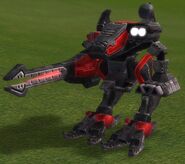 A Loyalist firing its Disintegrator Pulse Laser and Heavy Electron Bolter altogether
Add a photo to this gallery
Retrieved from "https://supcom.fandom.com/wiki/Cybran_T3_Siege_Assault_Bot?oldid=43379"
Community content is available under CC-BY-SA unless otherwise noted.