The Cybran T3 Mobile Heavy Artillery, nicknamed the Trebuchet, is a Cybran unit. This is an indirect fire unit. It must stop moving and deploy stabilizers before it can fire.

Experimentals aside, the Trebuchet is Cybran's most powerful mobile siege unit. The Trebuchet has long range and an incredible damage radius. This makes it extremely effective against large formations of weaker units, be they T1/T2 mobile units or structures. However, the Trebuchet suffers from low DPS, high firing randomness, and low initial shot damage. This makes the Trebuchet relatively ineffective at destroying singular, high-value targets like SABs or other T3 Mobile Artillery. Likewise, the Trebuchet is the worst T3 artillery at breaking any single shield since its lower DPS is less capable of overcoming shield regeneration. However, the Trebuchet's high rate of fire and blast radius give it a distinct advantage against layered shields (i.e., groups of shield generators in close proximity). It can hit multiple shield bubbles with each shot and it fires fast enough to destroy the generators during their brief down-time while they rebuild.

The Trebuchet is the most useful of the other Tech 3 Artilleries for facing large groups of close-together units and structures, due to its inaccuracy and large damage radius.

"One of the biggest guns in the Cybran arsenal, it is necessary for the Trebuchet to extend its stabilizing arms before it can fire. It cannot fire while moving." 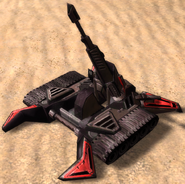 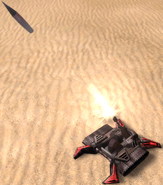 A Trebuchet firing it's cannon
Add a photo to this gallery
Retrieved from "https://supcom.fandom.com/wiki/Cybran_T3_Mobile_Heavy_Artillery?oldid=43382"
Community content is available under CC-BY-SA unless otherwise noted.