The Cybran T2 Mobile Stealth Field System, nicknamed the Deceiver, is a Cybran unit. This is a stealth unit. It is often an essential part of Cybran strategy. That said, care must be taken to ensure both that whatever units are hidden by the generator are within its comparatively small area of effect and that they remain so when moving, as the generator moves more slowly than most Cybran units (though not engineers or mobile artilleries). The stealth field is also ineffective when attempting to hide air units, although Cybran T3 air units have their own stealth fields.

One of the more effective Cybran tactics is the use of Deceiver networks to move a relatively large force within enemy radar range, draw off their mobile units with another, smaller group of units, then send in the stealthed units to do considerable damage to a base that is now, in theory, relatively lightly defended. The Fire Beetle is a "natural" choice for the stealth force, although considering its poor track record, this does not mean it should automatically be included in any attack you make utilizing stealth.

Unlike mobile shield generators, the Deceiver does not shut down its stealth field when loaded on an air transport and this is vital to one Cybran campaign mission. This does mean that you can get a mobile stealth field to anywhere on a map - stealthing mobile forces (yours, or your allies), bases (without needing to build stationary stealth generators), or even naval or air fleets. While the stealth field of an individual deceiver is small, several of them loaded into transports can often be quite useful. For a little bit of firepower, you can fill up the remaining slots of those transports with T1 Light Assault Bots to turn them into stealthed ghetto gunships, or simply use the stealthed transports to drop a stealthed army in a strategic position with nobody (who hasn't got omni) being any the wiser. Similarly, engineer drops in such a manner are exceedingly viable. At T3 it becomes possible to drop a Deceiver with a Trebuchet , and then possibly ferry another load of artillery. This will create a stealth, mobile artilery platform which works well against small defences. It can also be used to bombard the enemy base, though this strategy will probably be short-lived. If you have Aeon or UEF tech then you can use the more precise artillery for taking out defences prior to an attack.

Make sure your deceiver or engineers don't get captured, and try to capture any other factions mobile shields { preferably seraphim or aeon}, as a stealthed and shielded attack force is a great strategy. You can also use a fast and shielded army to march into an enemy base to destroy their omni, then drop a stealthed force behind them, preferably made up of MML's or mobile artillery[ and obviously deceivers]

The Deceiver looks like it is built on the same chassis as a Rhino, minus the turret. In its place is a miniaturized stealth field generator, which looks somewhat awkward perched right on top of the tank. When active, a purple, rippling field surrounds the generator.

"When the Mobile Stealth System is active, radar signals are dampened. This effect causes units linked to the Deceiver to not show up on enemy radars. This has no effect on optical sensors, however." 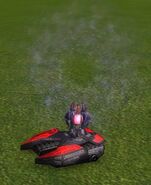 Deceiver with its stealth field active
Add a photo to this gallery
Retrieved from "https://supcom.fandom.com/wiki/Cybran_T2_Mobile_Stealth_Field_System?oldid=43377"
Community content is available under CC-BY-SA unless otherwise noted.