The Cybran T1 Attack Submarine, nicknamed the Sliver, is a Cybran unit. This is a submarine unit.

The Sliver is the basic Cybran maritime superiority unit. It is equipped with a Nanite Torpedo launcher and a Light Pulse Laser for use when surfaced.

Its ability to submerge means that it can attack many low-tech surface units without fear of retaliation. A small fleet of Slivers is an excellent first step towards gaining, securing or retaking control of a region of open water.

When surfaced, it can employ its laser - however, this is far too weak to be used against surface vessels, and is of limited use for bombarding the shore, as its range is relatively short and its power is low. Consider using this weapon to attack lone targets on the shore or stray T1 Hover units such as Aeon or Seraphim engineers, which are immune to torpedos. The Sliver has no air defenses.

The Sliver, although generally weaker in HP and equal torpedo DPS than its variants, along with featuring a weaker auto-gun, it is perhaps the best sub against its seraphim variant since it shoots 3 torpedoes at a time with more health too, so the torpedo defense on the sou-istle loses its edge, and so does any other unit with torpedo defense. 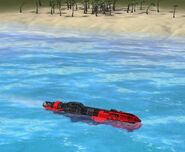 A Sliver at the surface

A submerged pack of Slivers easily destroy an enemy frigate 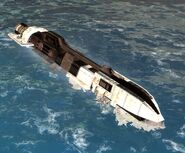 Cybran Sliver
Add a photo to this gallery
Retrieved from "https://supcom.fandom.com/wiki/Cybran_T1_Attack_Submarine?oldid=40097"
Community content is available under CC-BY-SA unless otherwise noted.