The Cybran T1 Assault Bot, nicknamed the Mantis, is a Cybran unit. This is a direct fire unit.

The Mantis is Cybran's Heavy T1 unit. It has legs, thus is termed a 'bot'. However, the Mantis serves the role of a medium tank in Cybran army. It has average HP and is armed with a Light Pulse Laser.

The Mantis is a quick-accelerating and fast-moving heavy T1 unit, making it the most maneuverable of the four. This unit also posses the highest ROF among the four, helping to reduce lost DPS to missed shots or overkill. However, the overall DPS is less than the Aurora, and the initial shot damage is lower than the Striker's. Though it is the most expensive of the Heavy T1s in Energy, it is the cheapest, along with the Aurora in mass. Unlike the others, the Mantis can quickly retreat from any situation that may become unfavorable. The Mantis can also be used as a fairly effective tech 1 rush when en mass to harass your opponent. They can also be effective for raiding lightly defended enemy bases and structures.

The Mantis shines at taking out mobile light artillery. It can easily dodge the shots and then get in close range to devastate them. Because of this, Mantises are quite good at supporting T1 point defences. They can take out mobile artillery with ease, and repair each other as well as the point defence after the attack.

To repair itself and other units/buildings, the Mantis possesses an engineering suite, which works at 1/5th of the rate of a T1 engineer. A large group of Mantises can also increase the build rate of any structure or unit substantially, which is particularly useful in early and mid-game play; whenever Mantises are not busy defending your base or attacking, they can assist engineers or perform low-level maintenance. While a Mantis's build power is much more expensive than an engineer's, and it doesn't have health enough to make up the difference under sustained fire, it is more likely to survive an early bombing raid to assist building an expansion. Despite having an engineering suite, it cannot be ordered to reclaim units, unlike the Aeon's Harbinger. A strange thing about the Mantis is that when a large group assists a factory, after the factory finishes a unit, the Mantises move around in circles. This is fairly annoying when you have more important things to worry about than where your Mantises go.

an interesting exploit for the mantis is that, even though it is unable to capture targets, if assigned to assist a damaged neutral building it will begin capturing it. This is even stranger as the mantis does not have the proper engineering abilities to capture units. (This does not work on enemy buildings or units as both the mantis and enemy unit would fire at each other and the capturing is quite slow only about one fith the speed of a Cybran T1 engineer.)

The Mantis has four legs in a crossed design coming out from its main body. Atop it has a fan shape of several pieces that are the only part of it that is coloured. It's two guns also serve as energy projectors when it is repairing a unit.

"Sporting a Heavy Laser Autogun in each arm, the Mantis can lay down an impressive field of fire. It also has a stripped down Engineering Suite which can repair the unit." 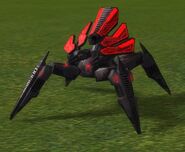