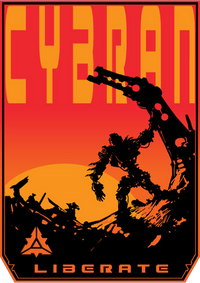 The Cybran Nation is one of four factions ​in Supreme Commander universe. They are fighting for their independence, after many years of enslavement by the Earth Forces. Cybran units are often insect-like in appearance and known for being extremely versatile: from assault bots which can repair other units to walking naval destroyers. Cybran versatility, both within their units and tactics, allows them to improvise quickly and modify their plans. They also use stealth and cloaking technology more than the UEF, Aeon Illuminate or Seraphim. The Cybran units are quite agile; however, they do not possess the firepower necessary to destroy experimentals with ease. Cybran weapons are generally fast-firing lasers that can wreak havoc on Tech 1 or 2 units; the attacking force can then melt away without a trace. It is important to remember to support Cybran experimentals with other units, such as air units, due to their softer nature than other factions' units from a cause on their focus on mobility.

At the age of 1,048, the Cybran Nation is led by Dr. Gustaf Brackman, the founder and inventor of the symbionts. Dostya is a high-ranking military official. QAI is an artificial intelligence which advises and informs Dr. Brackman concerning various elements. When the Cybran nation becomes part of the Coalition, Dr. Brackman is the driving force behind the Coalition research and development, producing items such as a Seraphim Translator, a Quantum Jammer, in addition to the majority of the new units to the Cybran faction.

Dr. Brackman's creations - "Symbionts" - served the Earth Empire unquestioningly up until the beginning of the Empire's downfall. They demanded recognition as their own people and sought independence. The Earth Empire responded with a "Loyalty" program, enslaving anyone with an AI implant. Dr. Brackman fled with his closest symbionts to the planet Procyon, creating the first node of the Cybran Nation. They vowed to fight for their freedom.

The Earth Empire began to invade Procyon, in hopes of stopping any organised formation of Symbionts. They set off the program again, but Dr. Brackman had already disabled the program in his fellow free symbionts. At first, the free symbionts, now known as Cybrans, employed guerilla tactics to deal with the imperial troops, but soon began fighting an all-out war with the Earth Empire. The imperial commander on site began methodically scorching the planet with nuclear weapons, forcing the Cybrans to flee. But it had made its mark; Procyon, once a rough but life-filled world, now became a barren and desolate wasteland.

As the war against the Earth Empire rages on, Brackman orders many Nodes to do what they do best: hide. In the meantime, Brackman gathers his military commanders in a desperate bid to devise a strategy that will enable the Cybrans to defeat the Aeon and the Earth Empire. The group quickly comes to the realization, though, that the Cybrans will never be able to win such a campaign.

2612 The symbiont research program finishes successfully, and Brackman provides the technology to the government, military and public.

2663 The start of the third great expansion, with hundreds of new colonies, puts pressure on the unity of the Earth Empire

2666 Procyon, the colony established by Brackman and his Symbionts, is one of several planets to apply for independence from the Earth Empire. However, like all the others, this proposition is rejected and military forces are sent instead.

2669 After the symbionts resist the occupation of Procyon, EarthCom forces massacre the colony. Symbionts revolt across the galaxy, so the Empire activates the secret loyalty program to pacify them, which brings peace but angers Brackman.

2678 Brackman and a few remaining symbionts, whose loyalty program was subsequently erased by Brackman, found a new colony. They decide to initiate a guerilla war against the Empire, to fight for the freedom of the symbionts and the Cybran nation is born.

Cybran units are fast and stealthy, with designs that are very angular, often including triangular and hexagonal shapes. An example of this is the ED-1 Cybran shield generator. Cybran tactics rely not on out-and-out battle, but guerrilla tactics, such as stealthily eliminating as much as possible before their retreat commences. Their units also allow a good commander to adapt to almost any situation, with many versatile units such as the Salem and the Mantis. The weapons used are primarily energy based, as well as a collection of tracking, non-tracking shells, bombs, and other projectiles. Like their units, Cybran weapons often include odd abilities like stunning (the EMP Grenade launcher and EMP cannon), or damage over time (the Kril Torpedoes used on the HARMS).

The appearance of Cybran design bespeaks their enhanced cognitive processing powers and their critical perspective, and their units and structures are efficient and and not bound by structural orthogonality. In contrast, the UEF designs around the needs and wants of conventional understandings of human bodies, with bots walking bipedally or vehicles with plenty of interior space rolling smoothly on caterpillar treads across terrain, and buildings designed to be highly orthogonal, with right angles and high vaulted ceilings; and Aeon designs hint at the centrality of their aesthetic spiritual sense, with symmetry, smoothness, organicism, and grace exhibited in every unit and structure, all adorned copiously with twinkling lights and reflective of their mimicry of highly advanced Seraphim technology.

Cybran buildings and structures, on the other hand, have their own set of considerations related to functionality, efficacy, and pluripotency. Cybran designs are complex, asymmetric, inorganic, deconstructive, angular; very rarely do Cybran structures have high ceilings, and interior volume is kept to a minimum. Cybran bots crawl efficiently across terrain on many legs, their vehicles mostly either hover low to the ground or walk in the manner of bots. Many Cybran units have multiple functions, and double or even triple for different roles, with as many bots and vehicles able to crawl as easily across the ocean bottom as their destroyers can deploy legs and climb up onto the beach. Cybran manufacturing systems make extensive use of networked robots, with flying remote drones and automatic arms that circle and crawl over the unit or structure under construction.

Retrieved from "https://supcom.fandom.com/wiki/Cybran_Nation?oldid=43469"
Community content is available under CC-BY-SA unless otherwise noted.