The Cybran Megalith Experimental Megabot is an experimental unit from Supreme Commander: Forged Alliance. Although it is an amphibious production unit, it excels at naval combat due to high health and strong torpedoes.

The Megalith's main weapons are two dual barreled Proton Cannons. Combined, the damage equals that of Galactic Colossus. The range of this weapon, while not as much as the Fatboy's, is still great, matching the Monkeylord's Heavy Electron Bolters range. The Megalith excels at cleaning up armies/bases from afar. The initial shot damage is huge, enough to kill all but the heaviest tech 3 land units. These cannons can shoot at very low angles, and can destroy units almost underneath the Megalith.

While the Megalith carries an anti-air weapon, it is useless against most air units, especially at the higher tiers. Groups of gunships or bombers can easily destroy a Megalith, so it needs a mobile anti-air escort. It can construct Bangers to contribute to that escort.

Unlike the Monkeylord and the Fatboy, the Megalith has extremely potent torpedo weaponry, and anti-torpedo weaponry as well with the ability to make units like the Brick underwater while in combat with naval units allows it to make reinforcements very fast. The Megalith is the only unit in the game capable of taking down an Atlantis in single combat. A player with a Megalith should use it more like a Salem Class, treating it like a naval unit with legs, instead of an amphibious land unit.

On destruction, the Megalith explodes, dealing substantial damage to surrounding units. The explosion equals that of the death of the Monkeylord.

Megalith units move automatically to engage enemies out of range. Be careful and vigilant, and make sure to draw in your Megalith if it wanders off too far. It might get lost.

As a production unit[edit | edit source]

An interesting feature of the Megalith is its unique unit production method. Unlike traditional factories, the Megalith drops a Megalith Egg, which it then proceeds to construct, as if it were a building. When the Megalith Egg is fully built, it hatches, and the built unit appears on the map. This method has many advantages:

However, there are two disadvantages to using this method:

As a naval unit[edit | edit source]

In the water is where the Megalith excels. Underwater, its speed increases by 25%. The Megalith is so big, that its Proton Cannons are seldom seen submerged, except for in the deepest bodies of water. In these conditions, the Megalith is the king of the seas: Any submarine unit will be quickly dealt with by the Nanite Torpedoes, and any floating/hovering units will be immediately destroyed (often instantaneously), by the Proton Cannons. In torpedo power alone, the Megalith can take down an Atlantis. However, the Megalith costs three times as much as an Atlantis and will lose in a battle against three Atlantises, so it is not as cost-effective. The Megalith will pin them down though, as any surfaced Atlantis will also have to face the Proton Cannons.

The Megalith is great at coming up from coastlines, but still staying in the water, and destroying land units from out of range – much like its little cousin, the similarly amphibious Salem.

In the water, only air units can take on the Megalith effectively.

Against other experimental units[edit | edit source]

In a head on battle, while the Megalith usually wins, mass for mass, it is an inferior unit. Unlike the Monkeylord, the Fatboy, the Galactic Colossus or the Ythotha, the Megalith doesn't have a secondary weapon for units that get too close. Being surrounded by units is especially dangerous for a Megalith. The Megalith really shines as a support fire unit, and should be used no differently than a Fatboy. While charging head-on is effective, the Monkeylord is much better suited for the job.

A good strategy in this respect where you are going to charge forward is to have built 2 Monkeylords and 1 Megalith. This will destroy everything in its way as the enemy targets can be softened from a distance with the Megalith before the Monkeylords plow through the softened lines and protect the Megalith from units which get too close. The only thing that can stop this is a massive amount of gunships.

The Megalith is one of the most potent shore bombardment units in the game, and should be used accordingly. Whilst it can be used effectively on land, it is best used in shallow water. Due to its weaponry being above the surface and the main body submerged, it is effectively immune to any ground attack. Simply parking it in the shallows near an enemy base gives them a real problem, ground attacks are ruled out and any naval vessels would be destroyed by its torpedoes (excluding two or three Atlantis, which would rule out most naval assaults).

This leaves air assaults as the only viable option, which can be countered to some effectiveness with adequate AA escorts (If near a base, they must not be allowed in range of its AA ground defences).

The Megalith can also carve out a path for your ally's Fatboy or Galactic Colossus (through the sea), to simply wander in and destroy their base; with the Colossus being superior for simply storming in and wrecking it, and the Fatboy having the advantage for mass rushes due to its factory capabilites. However the best partner for the Megalith is, appropriately enough, the Monkeylord.

The Megalith is also perfect for shore support fire when setting up a fire base near the coast line, or a naval base. When coupled with its ability to make engineers, it can be used for rapidly setting up firebases, and gaining territory quickly.

It is definitely not perfect, and will be swamped if on its own, mainly by Tier 3 and 2 units, but also with an excessive amount of T1 spam as the cannons simply can't deal with this effectively.

An effective defense is to destroy any support forces then retreat, and attack again with Tier 2 units. This is an important point, as Tier 3 units would fare better, but would be much less cost efficient than a swarm of tier 2 long range units. This strategy is a lot more effective when it is attacked from multiple directions, causing it to waste time rotating its weaponry.

The Megalith is also the best amphibious assault unit in the game. It should always be used when trying to establish a beach-head on a well-defended shore.

A Megalith escorted by Bricks 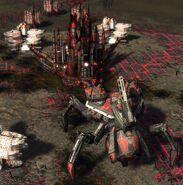 Brackman's Megalith used in 5th mission of Forged Alliance.
Add a photo to this gallery
Retrieved from "https://supcom.fandom.com/wiki/Cybran_Experimental_Megabot?oldid=43418"
Community content is available under CC-BY-SA unless otherwise noted.