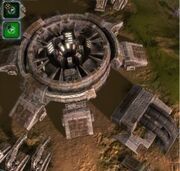 The Black Sun is a central plot element of Supreme Commander. It is the ultimate UEF planet-killer weapon of mass destruction, a symbol of their power and the culmination of President Riley's presidency, but it can be used for other purposes as well. Originally it works by sending huge quantum energy bursts through the quantum gate network, destroying any planet its beam makes contact with.

If the player carries out all the missions to the end with any side, the Black Sun does the following:

However, once Black Sun was fired, it had an unintentional side-effect: the quantum barrier between the human dimension and the Seraphim's was weakened, allowing their Warrior fleet to begin the invasion of Earth which, in turn, begins another war, this time between the Coalition of Human Defense (UEF, Cybran nation, and Aeon loyalists) and the Seraphim (aided by the Order of the Illuminate, an Aeon breakaway faction, and by the Cybran artificial intelligence QAI).

Retrieved from "https://supcom.fandom.com/wiki/Black_Sun?oldid=43596"
Community content is available under CC-BY-SA unless otherwise noted.