The Aeon battleship has the least range (100) when compared to the range of the Seraphim and Cybran battleships (126) and the UEF's (150) Summit Class. It does, however, have the highest speed (3.6) compared to the UEF (2.5), Cybran (2.7) and Seraphim (3.0). The Omen Class also boasts the highest DPS among the four factions' battleships. Because of its short range and low trajectory weapon it is better used as an anti-ship unit rather than for shore bombardment. The Omen Class is better suited for claiming naval superiority, allowing better suited units, such as experimentals, cruisers or Torrents, to bombard coastal bases.

See the battleship article for details on factional differences. 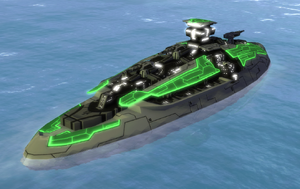 Idle Omen Class
Add a photo to this gallery
Retrieved from "https://supcom.fandom.com/wiki/Aeon_T3_Battleship?oldid=42474"
Community content is available under CC-BY-SA unless otherwise noted.