The Aeon T2 Guided Missile, nicknamed the Mercy, although similar to a bomber, is actually a guided missile.

The Mercy is not constructed by a missile launcher. Instead, any Aeon factory that can construct a T2 Air Unit can also construct the Mercy.

It fires a swirling cluster of bombs which are so volatile that launching them destroys the Mercy. The bomb does 2400 damage over a significant area of effect, making it effective at destroying both moving armies and tight clusters of buildings. Although it has low HP compared to other tech 2 air units, this isn't much of a drawback because it only needs to get close to its target once.

Once constructed the Mercy cannot refuel or dock. This is a significant drawback because it has a very small fuel supply. And unlike aircraft, when a Mercy runs out of fuel, it immediately explodes. Based on its maximum speed and fuel limit, it has a maximum range of less than 700, almost three times the range of a Tactical missile launcher.  Thus, a Mercy must be sent on its suicide mission soon after it is constructed(However note that it can land on the ground to save fuel). Mercy cannot be constructed by a Aeon T3 Aircraft Carrier or a CZAR. With the release of Forged Alliance, once launched, the Mercy cannot dock again to refuel. While this is a hinderance to the Mercy on large maps, it shouldn't really be used if your enemy is so far away that you must use a Carrier to move it into position. Most likely, by the time you have a Carrier capable of carrying mercies, your enemy will have enough flak, SAM, and shields to stop dead a full-blown T3 Strategic Bomber strike, let alone a Mercy snipe. Mercy snipes are for small quarters, and are most menacing when used to counter an ACU rush.

These guided missiles are more effective in groups. Unlike other unit types, it isn't effective to have a single factory build a number of these units one-by-one because of their extremely short fuel supply. The first Mercy constructed will be out of fuel before the last one is constructed. When planning an attack with guided missiles, one should either build them using as many air factories as possible at the same time, or let Mercies land on the ground near factories in order to save fuel before striking.

It can be difficult to defend against an incoming group of Mercies. Tech 1 anti-air units can't do enough damage in the short time that it takes for them to pass overhead. Tech 2 anti-air units have a similar problem, though in sufficient numbers they can get some kills. Even tech 3 anti-air units aren't as effective as one might expect because they waste their missiles with overkill. On the other hand, Shields are an effective defense against an incoming attack group of Mercies because each 2400 hit points of shielding effectively destroys one Mercy. For instance, it takes 2 Mercies (12k energy, 600 mass) to destroy one Parashield (900 energy, 120 mass), when Asylum can hold off two Mercies.

The secret to preventing mercies from destroying your forces [or sniping your ACU] is surprisingly simple: mobile flak. Using stationary flak makes them a primary target, but mobile flak can patrol or lure the mercies away from their target. Although any mobile flak will be sufficient, the Aeon and Seraphim versions with their high rate of fire, speed, and hover capabilities can cause some casualties. The UEF Sky Boxer is also good for the job, as its very high rate of fire and rear cannons make it especially versatile at combating the mercy. The cybran Banger has a very low rate of fire and will commonly experience overkill when fighting the mercy.

The Mercy is incredibly good at taking down ACU's. 6 of them will destroy most ACUs, 7 will guarantee a kill against an un-upgraded ACU. This makes them a must for any assassination game, and an excellent tool for punishing ACU-rushers.

A good strategy is, if you cannot perform SEAD for whatever reason, to distract your enemy with various air units, such as interceptors, gunships, or maybe even an experimental late game, and while their AA is distracted, snipe their commander with a horde of Mercies. To make this most effective, lead the enemy's AA in the opposite direction from which your Mercies will be attacking. This means that even if your air units are destroyed, the AA won't have enough time to turn around before the Mercies arrive. To top it off, destroy your enemy's radar, for a stealth attack.

To further enhance this strategy, use land units initially, then suddenly build a T2 air factory, and a group of Mercies. This will trick your opponent into thinking you are using land primarily, and his AA defenses will most likely be weak. Most effective if the scouting of your T2 factory is prevented.

﻿The Mercy is very similar to the German's V-1 Flying Bomb in terms of appearance and role. 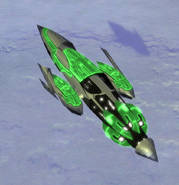 Idle Mercy
Add a photo to this gallery

Retrieved from "https://supcom.fandom.com/wiki/Aeon_T2_Guided_Missile?oldid=42467"
Community content is available under CC-BY-SA unless otherwise noted.