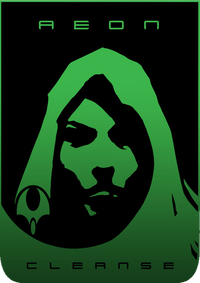 The Aeon Illuminate is the third faction in Supreme Commander universe. They are made up of humans that follow the Way, the philosophy of the Seraphim aliens found years ago on Seraphim II before they were wiped out by xenophobic humans led by Commander Smith.

During humanity’s second great expansion into galactic space, Commander Trent Smith of the Earth Empire led a group of scientists and colonists to Seraphim II, a planet approximately five times the size of Earth. Here, for the first time, humanity encountered intelligent alien life. Commander Smith, following previously untested protocol for dealing with intelligent alien species, quarantined the planet and refused to establish communications so as not to reveal Earth’s position.

As recorded in CDR Smith’s log entries, he ordered the human colonists that were under his command to meet the aliens--who were dubbed Seraphim, as their actual name was unpronounceable by humans--with violence. The exact reasoning for his extreme reaction is unknown, but later examination of his psychological records show a marked tendency to react violently when dealing with unknown factors.

Smith’s violent reaction prevented any real discourse between the two species. The Seraphim simply avoided the humans whenever possible. However, the human colony’s biologist, Dr. Jane Burke, sought out and secretly befriended the Seraphim. Others joined her and soon a small group of humans were regularly visiting and learning from the Seraphim.

The Seraphim taught the humans advancements in quantum and temporal mechanics. More importantly, they introduced a philosophical viewpoint considered unimaginable by human minds, a way of peace and love so advanced that it completely shifted their perception of the universe.

After learning of Burke’s involvement with the aliens, Smith became convinced that Burke was brainwashed. He led the remaining Imperial colonists into a massive and suicidal campaign to destroy the aliens and Seraphim II. Just before Smith’s forces fell to the superior might and numbers of the Seraphim, Smith’s scientists succeeded in engineering a strain of virus unlike anything encountered on Seraphim II. The Seraphim were caught off guard and, despite Dr. Burke’s best efforts, were only able to slow the deadly effects. With the entire atmosphere saturated, not one Seraphim went unexposed.

During the last days between humans and aliens, the Seraphim decided to teach Burke as much as possible about their ‘Way.’ In the middle of one lesson, Burke experienced a vision of a galaxy torn apart; entire stars stripped of their resources and left to die, planets destroyed and more life needlessly lost than could be imagined. At that moment Burke was convinced that the Seraphim’s “Way” was the only means to prevent the Empire from destroying everything.

After 3 years and many lost Empire probes and expeditions to Seraphim space, a message made its way to Earth. The message was simple: The remaining Seraphim II colonists, now calling themselves the Aeon Illuminate, invited the Empire to embrace the teachings of the wise alien culture and to share in “something beautiful”.

As the Aeon’s visions predicted, the Empire immediately cut communications and sent military forces to quarantine Seraphim II. In the eyes of the Aeon, the Empire’s destiny as defilers and destroyers of worlds was sealed.

Aeon tactics rely on efficient, specialized attack vehicles with very powerful, yet quite limited extended capabilities, especially in comparison to the Cybran. Their weapons tend to be slower firing, but more damage per shot compared to their rivals. The Aurora and Obsidian, as well as other units, support this theory. Their weapons tend toward Seraphim-derived weapons, as well as other oddities such as sonic weapons or their Serenity's Sonance artillery that can fire on the move. Aeon units are generally more aesthetically oriented than their UEF and Cybran counterparts - as a result of this, they possess a sleek, alien, organic and seemingly innocent form in neutral mode - but when in attack mode, they open up, revealing their weapons and giving the enemy cause for alarm, if they remain operational long enough to comprehend the capabilities of the unit.

"Galactic Colossus" Sacred Assault Bot: Little escapes the gaze of the Galactic Colossus. Mounted in the head of this walking behemoth is a single eye that focuses Quantum Energy into an incredible blast of destructive power. This Phason Laser sweeps across enemy units, causing unparalleled damage to anything with which it contacts. In addition, the Colossus is armed with a tractor beam that pulls in and destroys mobile enemy units. This gargantuan construction can eliminate entire armies alone, due to its massive amount of armor, but will be easily overwhelmed if it encounters a large amount of gunships, bombers, or artillery against it, with many commanders recommend supporting it with anti-aircraft and more agile supporting units and it will be able to cleanse opposing forces with ease. Its weapons are useless underwater, so support in the form of submarines, hovercraft, or surface vessels are advised.

"Tempest" Submersible Battleship: A top mounted Oblivion cannon combined with 6 Chrono Torpedo Launchers intended for self-defense, as well as the ability to construct Tech 1 and 2 naval units. This unit is able to destroy a fleet when surfaced, and has the virtue of being harder to detect, owing to it's ability to submerge underwater. This experimental is a highly recommended choice by commanders for missions requiring naval units, where it excels at defense and construction.

"CZAR" Flying Fortress: A center mounted Quantum Beam Generator dominates the CZAR, but is equipped with AA and Harmonic Depth Charges. If an enemy commander encounters one of these, destruction of said commander is all but inevitable, but the lack of armor makes this unit very fragile. It will be destroyed if it comes under significant anti-aircraft fire, so many commanders do not recommend sending it alone for air assaults. Under the right conditions, however, this becomes a very devastating machine. This craft, however, cannot be repaired by units with engineering suites due to its inability to land, but it regenerates armor, albeit slowly. In addition, it has the capability to both construct, contain, and perform maintainance on aircraft, leading it to function as a flying aircraft carrier.

"Paragon" Experimental Resource Generator: Has the ability to generate a extreme amount of resources, which scales with demand. However, this near limitless generation leads to it being the most volatile structure, as it explodes with the power of a strategic weapon upon death. Has a very low amount of armor, the lowest of any experimental unit. The build time is extremely high, but lowest cost of the game enders, which this unit easily makes up the cost by its mere completion. Wise commanders often heavily protect it, normally with multiple shields and dozens of point defenses and anti-aircraft weapons dedicated to solely protecting it.