The Tempest is a powerful Naval unit and is the one of the strongest seaborne vessels, second only to the Atlantis and the Megalith.

Its most important capability is the extremely powerful Oblivion Cannon which, when the Tempest surfaced, has the capability to sink most naval units with a single well placed shot. Although the battleships (All Factions), aircraft carriers (All Factions), and the Aeon destroyer would last a little longer due to their high HP, the Oblivion Cannon is able to take out closely grouped units with its high damage and its significant damage radius. The Tempest also has a series of torpedo launchers meant for self-defense. Its torpedoes are comparatively weak, however, and thus this unit should not be expected to defeat seaborne defenses or high-health navies from beneath the surface. The Tempest also has a long vision radius, and is equipped with Radar & Sonar.

Though its torpedoes are weak, a smart Aeon commander will dive upon encountering a UEF Summit-class Battleship, which has been observed to either prevail or achieve a draw. The Summit-class is the only Battleship to match the Tempest in main gun range, although the UEF and Seraphim cruisers' missiles will match the Tempest's range as well. Given that the Tempest is such a large and slow target, this is definitely something to worry about. Hence, the Summit-class Battleship can more or less guarantee a win or draw against a vessel that is over twice as expensive in mass and over four times the energy cost (11250 vs 28000 mass, 75000 vs 350000 energy). No other naval unit is capable of doing so. Other counters to the Tempest include the Hauthuum, other Tempests, or experimental ships from mods.

There are two slightly more expensive units that will defeat a Tempest: the slightly higher-priced UEF Experimental Aircraft Carrier Atlantis, and the expensive Cybran Experimental Megabot Megalith. Both units have better torpedoes and superior health. The Atlantis can submerge, just like the Tempest, but it can also build and launch up to 150 aircraft of any tier (excluding transports). Furthermore, the Atlantis can even build all of these aircraft while underwater, which something the Aeon ship cannot do. Regardless of stored aircraft, the Atlantis can still win against the Tempest if it remains submerged. The Megalith is also capable of defeating the Tempest, because it also has anti-torpedo weapons, stronger torpedoes, and two oversized proton cannon turrets which prevents surfacing of the Tempest.

The Tempest is also equipped with an anti-torpedo weapon, making it more resistant to attacks by torpedo units, especially subs. The Tempest, however, is vulnerable to even the smallest of anti-naval air attacks, as it is not armed with any anti-air weapons. When surfaced, it is vital that the Tempest be escorted by a sizable air force to counter any attempted air attack from enemies. Unless grouped into large sorties, torpedo bombers remain one of the least effective air attacks, as the Tempest is equipped with anti-torpedo defenses.

Lastly, the Tempest is capable of building T2 and T1 naval vessels, and all tiers of engineers. It must be surfaced and remain still to perform this action. This allows the Tempest to replenish lost units after an assault on an enemy position, or to build additional navy units for shore bombardment. Even though the Tempest lacks any form of AA or tactical missile defense , this unit can defend itself by building the Infinity Class Cruiser .

See the battleship article for details on factional differences.

Because of the Tempest's vulnerability to air attacks, Aeon commanders should keep it safe from enemy intel until air support is provided for the Tempest. Additionally, because of its superior build speed to a T3 naval factory, it can construct cruisers in a matter of 40-50 seconds. This will come extremely helpful against gunships. However, when it comes to bombers (because of their early bomb dropping time), the cruisers should be spread out in a large circular formation for the tempest, allowing more succesful AA defense against bombers. When surfacing for shore bombardment keep in mind the Tempest is an easy target even for coastal artillery or cruise missiles, so maintaining range is advised.

Tempest could also be used as a mobile forward naval base, just like UEF Fatboy did on land. Though in case of Tempest, it can only build up to T2 naval units and all tiers of engineers. This allows your naval factories to concentrate building T3 units (battleship, aircraft carrier, strategic missile sub, and missile ship) as needed.

If possible, pair up each Tempest that you build with either Keefer-class carrier, or even better with Czar. This pairing will enable you to deal with almost any threat sent to it (except strategic missile attacks of course), with Tempest dealing with surface units and submarines as well as build additional naval units, while Keefer/Czar dealing with hostile air units.

The tempest is a large clumsy unit. It is prone to getting stuck on the surface, especially when surrounded by a fleet. Submerging when this happens is usually the best solution. Sometimes the AI pathfinding is very clumsy going around objects, so queuing its movements to micro manage this can help.

The Tempest's main gun can be fired straight up by ordering it to attack ground, waiting for it to start charging up, and then clicking submerge. As part of the submersion animation, the gun will point straight up and fire its shot. Experiments run in Sandbox mode revealed that three of these upward shots is enough to shoot down a Czar. This is rather odd considering the Czar has far more HP than the 18000 damage three shots are supposed to equal, but perhaps there is a special damage modifier. It is of yet unknown how this relates to other air units, such as the Ahwassa Experimental Bomber.

The Tempest possesses the most powerful version of the Oblivion Cannon, dealing 6000 damage per shot with incredible accuracy. 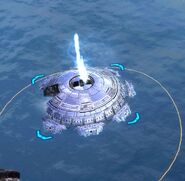 A Tempest dives and fires at the same time. The shot goes straight upward 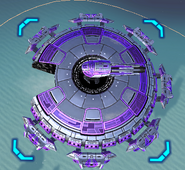 The Tempest
Add a photo to this gallery
Retrieved from "https://supcom.fandom.com/wiki/Aeon_Experimental_Battleship?oldid=45850"
Community content is available under CC-BY-SA unless otherwise noted.